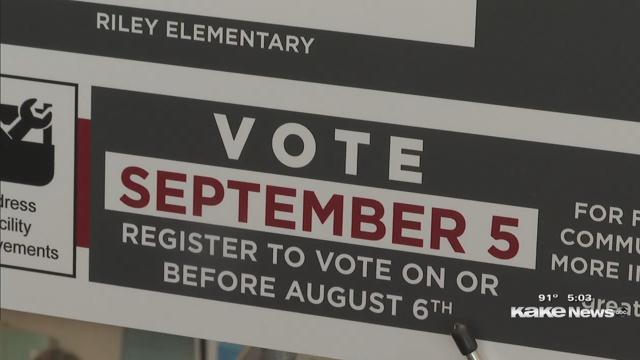 Voters in Great Bend have rejected both propositions on a $44 million school bond vote.

One of the questions would have added storm shelters and safe entrances at each of the district's schools. The bond would also have added preschools to each elementary school, and moved 6th graders to the middle school.

Passing the bond would have increased taxes on a home costing $87,000 to about $145 more a year per household

Great Bend Public Schools will learn the fate of it's future after the bond votes are counted on Thursday. Parents in the community are divided on what they think is the right decision. "I know that as far as people I've communicated with in town, the general consensus right now is "no," says Melissa Scott, a parent who's vote is undecided.

Rob Bauer is a parent voting "yes," and he hopes voters will see the economic impact the upgrades will have on the community, "beyond just our kids, this is going to impact our community at large."

If the $44 million bond passes, all schools in Great Bend will see many safety improvements and some structural upgrades. The biggest change will be integrating the 6th grade into the middle schools. With a home costing $87,000, taxes would jump to about $145 more a year per household. Scott doesn't think this change is necessary, "hopefully if it does get denied or shot down at this time, maybe it will force the board to go back and re-evaluate and put a little more emphasis on the kids and a little less on the unnecessary upgrades."

Bauer wants the community to invest in the future, "well it really comes down to my children. Somebody twenty/thirty years ago decided to make the investment for my education growing up here in great bend, now it's my obligation to do the same for my kids and the rest of the kids in the community."

The vote will consist of two questions. But the great bend school's superintendent, Khris Thexton, says the most important aspect is upgrading the safety in schools, "the safety and security of our buildings. That's upmost in our minds. The best that we can keep our staff and students secure. That's what we're looking for."

Ballots are due by Thursday and the community will know the final answer by the end of the day.