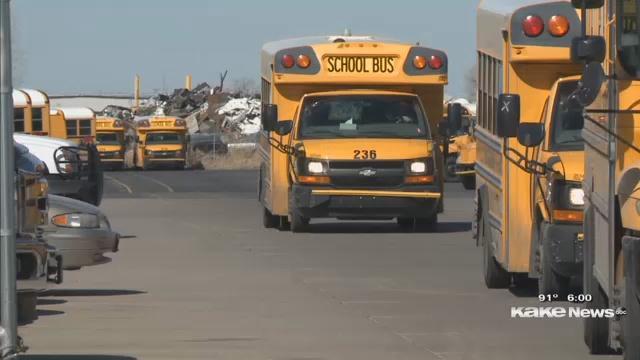 A Wichita woman said she is frustrated Wednesday after her children that go to Wichita Public Schools haven't made it on time due to bus delays.

"It's a little bit frustrating," said Jessica Lies, the mother of Gavin, 11, and Bret, 15, who have been late to school recently due to the delays.

She said she doesn't want to blame the bus drivers in this situation, and it hasn't been an issue until recently.

"The bus started out last week late," she said. "Not just late, but 20 minutes late."

From there, she said the delays continued and got worse. Tuesday, her son Gavin missed his entire first hour class.

"He's worked so hard to get honors and now he's missing class," Lies said. "I don't want him to fall behind."

Her other son Bret has cerebral Palsy and his bus stop is at the end of their driveway. He goes to Wichita West High School and takes a bus that locks in his wheel chair so it doesn't move during the ride. His grandmother Lynn Nash watches him and his brother Gavin at the bus stop everyday, and witnessed Bret be late first hand.

"He's been late I don't know how many times," Nash said. "We've had different bus drivers."

According to Lies, with different bus drivers has come more problems, when a substitute driver was on her son Bret's route.

"She was actually upset because she's like, 'I don't know how to lock this wheelchair,' you know she was upset about it as well," Lies said.

Assistants from the school had to come help lock Bret's wheelchair in. Nash said she spoke with one of the bus driver's when at the bus stop to find out the reason behind the delay's and she was told it's because some of them have two routes. Lies and Nash began to notice the different routes on First Student's first view app that tracks where the buses go. When they saw the buses going other places before they found out that some driver's had two routes, Nash said it worried them.

"When it shows them going on a totally different route then what you know that they're supposed to you kind of wonder where your child's at," Nash said.

After dealing with the issues for as long as her, her mother and children have, Lies said she just wants others to join her in trying to speak to someone and help get it fixed.

"Keep contacting them. and letting them know, you know, this is not OK," Lies said. "We cannot continue to have our children late for school."

First Student media relations employee Jen Biddinger said they are aware of bus delays because their is a nationwide need for bus drivers. According to Biddinger, some drivers may have to have double routes because there are not enough drivers to drive one route. In the wake of the situations she said she encourages people to apply with First Student and help fix the problem as they deal with these situations.