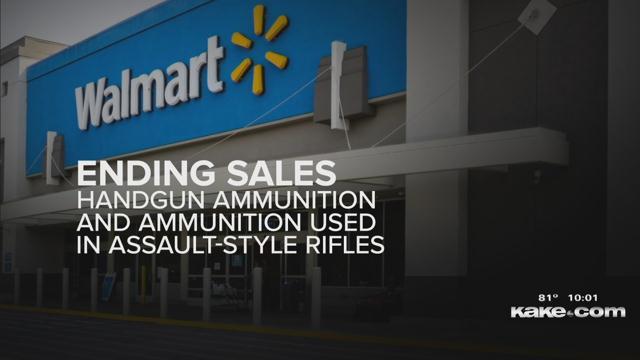 One month after a gunman opened fire at a Walmart in El Paso, Texas, killing 22 people, the nation's largest retailer is making changes to its gun policies.

"They're a privately owned company. They can do what they want," says Jordan Westbury, a local Wichita shopper.

Jordan Westbury says he doesn't have much of an opinion on Walmart's new gun policies, but he's hoping to benefit.

"Hopefully they close it out and I'll get a good deal," he says.

After selling through current inventory, Walmart says it plans to stop the sales of short-barrel rifle ammo. It will also no longer sell handgun ammunition. Walmart CEO, Doug McMillon, says these new policies come after a "hate filled attack in our store."

"It's sick. It really is sick," says one Wichitan.

The retailer is also asking customers to no longer openly carry in any of its stores or Sam's Clubs. Just hours after the announcement, Kroger, the parent company of Dillon's announced the same policy.

Last month, a man walked into a Missouri Walmart wearing body armor and carrying a loaded rifle with 100 rounds of ammunition. Police believe he was attempting to cause chaos.

Walmart says it's these types of incidents that have caused them to change their policies.

"It's really just silly rules made by silly people...If more people had guns when people start shooting places up, then people that have guns will stop it," says Local man, John Springer.

Wichitan, Connie Barton, says she understands the new rules, but she still has concerns. Like many Kansans, her family uses guns regularly.

Barton says she doesn't want it to be harder for her husband to get ammunition to hunt. Walmart says it understands these concerns, saying its remaining sales will focus on the needs of hunting and sport shooting. Still, some Kansans aren't convinced any positive change will be made.

"If you wanna hurt somebody, you can use a hammer. What are they gonna do, outlaw hammers?"

The NRA responded to Walmart's new policies by saying in part,

"It is shameful to see Walmart succumb to the pressure of the anti-gun elites. Lines at Walmart will soon be replaced by lines at other retailers who are more supportive of America's fundamental freedoms..."