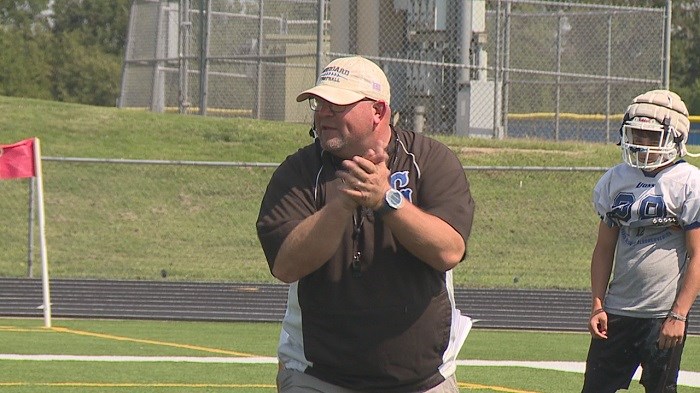 The Goddard Lions are in the midst of an impressive run and they're hoping to keep it going in 2019.

The Lions have won at least 10 games in three straight seasons and they have all of the pieces to get to that mark again this year. Goddard head coach Tom Beason and his team don't shy away from the high expectations they've created.

"We feel like we've gone past that rebuilding now and we're in an annual state of how do we fix it? How do we come back every year and stay competitive and honestly it's harder than a rebuild. I've been a part of some rebuilds in other places and it's something that's a challenge but the expectations are low. Now it's the opposite," said Beason.

"Now the expectations have never been higher. I've got people in the media, whether it's KAKE or whether it's Vype Magazine or whatever picking us to win stuff, and I'm like guys we haven't played a game yet. So that expectation level is a little different than it has been in the past but it's welcomed. It's exciting."

There's a lot to be excited about when it comes to the Goddard offense. Last year sophomore quarterback Kyler Semrad threw for nearly 2,000 yards and had 18 touchdowns, and he's got an embarrassment of riches at wide receiver.

Beason said it's one of the deepest wide out groups he's ever had and it's led by seniors Carter Morrow, Kaeden Hoefer and Blake Mitchell. If they keep piling up victories then they'll be the winningest class in school history.

"That would be pretty cool. We've broken a lot of records since we've been here," said Hoefer. "It would be cool to break one more."

"Talking about those kind of numbers, that's longevity. Longevity is the thing that's really difficult to accomplish," said Beason. "Being good for one year is having the right guys in the right place and getting a little lucky, which we've done."

"Never quit and never give up," said Morrow. "Because against McPherson we were down at the half and came back and it was a good time."

Goddard kicks off the season at home on September 5th against Wichita East.