Kansas teachers compete with Netflix for students' attention in the classroom 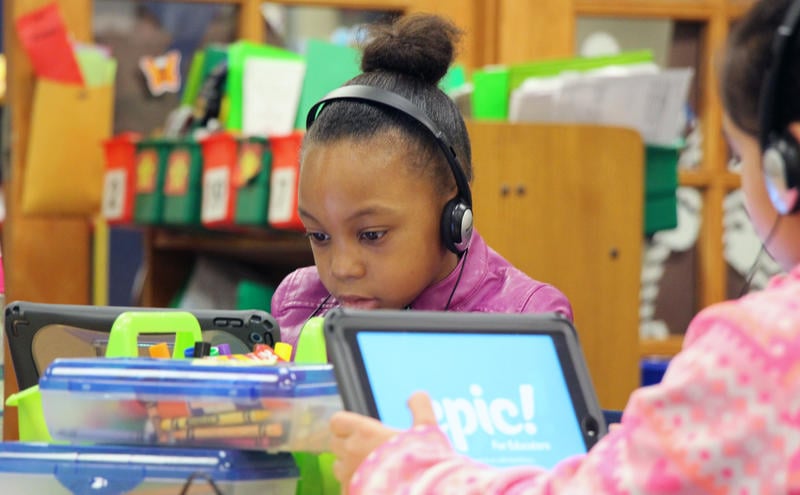 Smartboards have been replacing chalkboards in Kansas for more than a decade. Yet districts are still figuring out tech’s place in the classroom.

Arming each student with a tablet makes it easier to create individualized lesson plans, and schools and parents can better keep track of student progress and assignments. But without the proper barriers, technology can distract more than assist (for example, parents can’t as easily regulate their kids’ screen time).

Still, Kansas schools believe the slow adjustment to tech-heavy classrooms is worth the trouble considering growing demands for digital skills in the workforce.

"This is the reality you have to deal with," said Mark Tallman, associate executive director of communications at the Kansas Association of School Boards, "but the districts are struggling to find a way to make sure they're not a distraction."

Many school districts in Kansas have been providing computers for each student for years, and in Shawnee Mission, students started getting a tablet or laptop in 2014.

It was a rollout Shawnee Mission East High School teacher Linda Sieck described as “fast and furious.” She said the first year was marked by trial and error as teachers figured out how screen-based education would work.

In the five years since, Shawnee Mission teachers have better adapted to the technology, but still worry about how distracting the devices can be.

The district controls what apps and websites students can use on the devices. Enterprising students, however, have found ways to play games during class or pull up an entertainment app like Netflix when a teacher’s back is turned, pitting teachers against Stranger Things and Thirteen Reasons Why for attention.

“You’d get a hallelujah from people if we would just block Netflix,” Sieck said.

BYOD: Bring Your Own Device

Schools have less control over devices students bring in, namely cellphones. Some districts let students use cellphones in class, often only with permission by a teacher and restricted to high schoolers.

At Hays Middle School, students must stash their phones in lockers, and at Highland Park High School in Topeka, some classes require students to put their phones in special locked pouches. In Wichita, phones are allowed between class time at high schools, a change made in 2018 when the district’s strict ban on cellphones failed to stop students from using them.

But there’s no guarantee every student has a cellphone or that all the phones will work the same.

“Many districts tried a BYOD approach — bring your own device,” said Boyd Adolfsson, vice president of technology for the education consulting group IDE Corp. “And that’s really what brought to the forefront the equity concerns.”

That’s part of the philosophy behind districts providing the computers: Giving every student the same device ideally would help even the education and technology playing field (though students without internet access at home are still at a disadvantage when it comes to tech-driven curriculums).

The main reason the Lansing School District in the Kansas City metro area started giving students computers was to better prepare them for the growing number of jobs that require computer skills.

In 2017, those types of employment made up 6.9 percent of the United States’ GDP. And no matter what, most jobs today require at least moderate level digital skills, according to the Council on Foreign Relations.

Superintendents believe developing students’ computer expertise is worth the distractions.

“You’re not going to be able to segregate yourself from all things technology and still be a functional member of our society,” said Dan Wessel, the interim superintendent at the Lansing School District. (Students at Jardine Elementary in Topeka use laptops to watch educational videos. CREDIT CHRIS NEAL / FOR THE KANSAS NEWS SERVICE)

Teachers at Shawnee Mission found the computers gave them more options for assignments. Students could research beyond the topics printed in a textbook and tasks delivered through an app were less likely than a paper copy to get lost on the trek from school to home.

Shawnee Mission Northwest High School junior Kelly VandenBos said working on a Macbook made it easier to take control of what she was learning. But that flexibility is often undercut by technical issues. Connection problems with the district’s virtual private network frequently keep students from accessing homework assignments outside of school.

“It’s a daily occurrence,” VandenBos said. “I haven’t had as many issues but I know a lot of people in my classes that complain about how they’re not getting their problems taken care of.”

For parents, the reliance on devices means they have less control over their kids’ screen time.

In November, about a dozen parents in the district spoke out against Shawnee Mission’s tech policy during a school board meeting. They were concerned that the screens could be addictive and harm brain development, along with other issues.

So, Shawnee Mission created a task force to evaluate the policy, and in a report delivered in June, the panel recommended that the district’s tech be used with more care. It suggested better integrating tech into individualized plans for each student and balance with time away from screens.

Other school districts in Kansas have faced controversy over their tech policies too. The Wellington school district started using an online classroom tool called Summit Learning in 2018, but parents threatened to pull students out of the school over frustration with the program.

Wellington student Michaela Washington-Adkins said that while the tech-driven curriculum took some adjustment, she was able to use it to skip her junior year.

“The Summit platform was probably one of the reasons why I was able to graduate early because, as I was able to pace myself, a lot of my classes I finished before the year even ended,” Washington-Adkins said during a Kansas Leadership Center event on Kansas school redesigns last week.

The Shawnee Mission district sent a letter to its principals earlier this month recommending computers be put away during recess and special classes like art and music.

For Gretchen Shanahan, whose kids go to Shawnee Mission schools, this is a welcome step. But she is still not convinced about the value of having screens in the classroom.

“I’m not a luddite,” Shanahan said. "But it is also about determining how is this beneficial.”