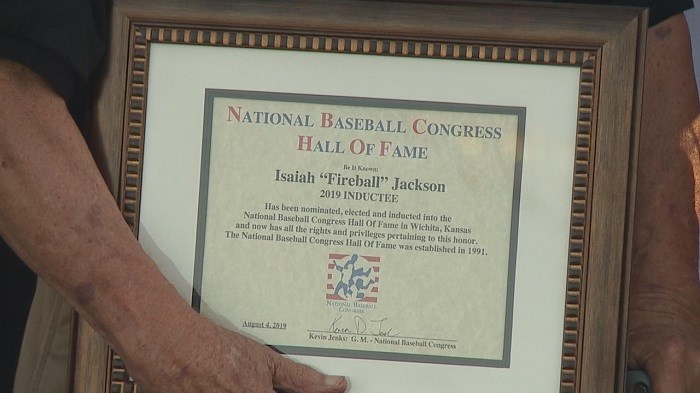 54 years ago, a young pitcher took the NBC World Series by storm. His name was Isaiah Jackson, but everyone called him Fireball.

"I remember how hard he threw," said Gerald McCoy. He just overmatched the opponent that night. It was like a man playing with children."

Today, Jackson hasn't been forgotten. He was inducted into the NBC Hall of Fame this year. Gerald McCoy, a local author wrote a book about his life (Fireball!: The Tragedy and Triumph of Isaiah Jackson) and you can even find a rare autographed piece of sports memorabilia bearing his name at the Wichita Sports Hall of Fame.

"We always have to keep in mind that Fireball Jackson was something so special, that's why we are now in charge of making sure this particular piece of sports history is saved for the residents of Wichita, Kansas," said Paul Savage, the president of the Wichita Sports Hall of Fame.

In his first appearance in the NBC World Series Jackson struck out a record 55 batters over the course of the tournament. A record which still stands today.

"If circumstances had been different, he may have been in Cooperstown," said former Pittsburgh Pirates scout Bill Clark. "He had that kind of an arm and the strength to do that."

Jackson's struggles began when he was abandoned by his parents at the age of three and spent his adolescent years in the foster system. With little guidance, he turned to a life of crime.

Jackson and his brother were both arrested for armed robbery of a service station in Kansas City in 1957.

"Even though he was only 17 years old, he was sentenced to Lansing Penitentiary," said McCoy.  "He's one of the youngest inmates to ever serve time at Lansing."

During his sentence, Fireball joined the prison team and word quickly spread of the talented teen's pitching abilities.

"I broke into the Kansas State Prison to see him and he was eligible for parole," said Clark. "So I was able to work out a two state parole situation."

Jackson was signed by the Pittsburgh Pirates and began his professional career in Class-A Reno. Fireball flamed out after a few months because of more arrests.

After decades in prison, he ultimately found peace not on a baseball diamond but with a paint brush and easel.

"He viewed a prison cell not as a place of confinement but as an art studio where he could exercise the freedom of expression," said McCoy. "The impact he could have made on our society, the impact for the good, is society's loss."