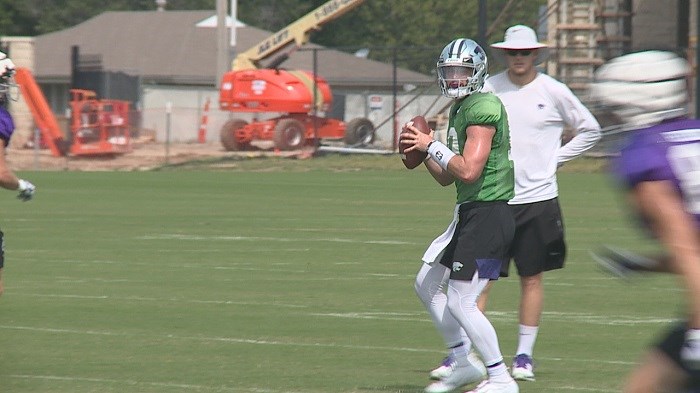 K-State football coach Chris Klieman pulled back the curtains and let reporters sit in on a portion of fall practice for the first time in years.

That's not the only difference for the Wildcats this fall, they have a true starting quarterback in Skylar Thompson.

During Thompson's first two seasons in Manhattan he had to split time with Alex Delton, but Delton transferred to TCU and will play for the Horned Frogs this year.

Thompson already has 12 starts under his belt but since he became QB1 he's been brimming with a new found spirit.

"He's playing really well. He's playing with so much more confidence. I knew he would because I just saw how much of a jump he made from practice five or six to practice 13 in the spring. I just saw his work ethic in the summertime of how much film he watched on his own and how much he was up here trying to continue to learn about our system. I can see in the first four practices that he's got a great grasp of things," said Klieman.

He's already checking things at the line of scrimmage, which he wouldn't have even thought about doing until late in the spring. Now he feels really comfortable with signals and being on the right page with the wide receivers and tight ends. It's been really neat to see how much his growth has been," said Klieman. "That's just in four days, but now I'm really hoping and counting on there being some real substantial growth here in the next three weeks."