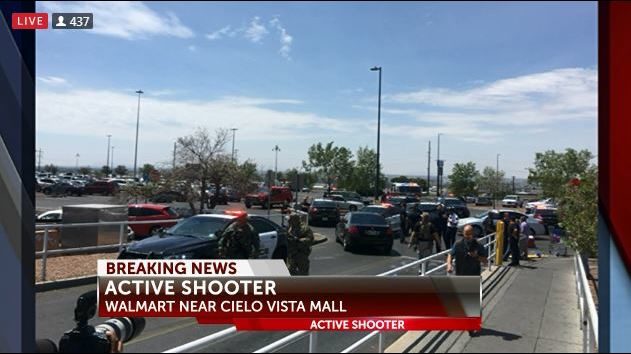 Texas Gov. Greg Abbott and El Paso police say 20 people have been killed and 26 others wounded in a shooting at an El Paso shopping center.

Law enforcement officials have said a 21-year-old Dallas-area man named Patrick Crusius is in custody in the shooting. The officials were not authorized to discuss an ongoing investigation publicly and spoke to The Associated Press on condition of anonymity.

Police say most of the victims of Saturday's attack appear to have been at a Walmart near the Cielo Vista Mall.

A law enforcement official says at least 15 people were killed in the attack at an El Paso shopping center and that the suspect who was taken into custody is a 21-year-old Dallas-area man named Patrick Crusius.

The official was not authorized to discuss an ongoing investigation publicly and spoke to The Associated Press on condition of anonymity. The official also stresses that the death count is preliminary and that the investigation is still ongoing.

Police say most of the victims of Saturday's attack appear to have been at a Walmart near the Cielo Vista Mall in El Paso, though they say the mall had also been "secured."

El Paso hospital say they are treating 22 victims, not including a patient who died after arriving at one of the hospitals.

A University Medical Center of El Paso official says one of 12 people who were rushed to the hospital after the attack on a shopping complex has died.

Ryan Mielke, a hospital spokesman, says all of the victims suffered traumatic injuries in Saturday's attack at or near the Cielo Vista Mall. He declined to provide additional details about the victims, including the one who died.

Mielke says two children, ages 2 and 9, were stabilized at the medical center before being transferred to the neighboring El Paso Children's Hospital.

Authorities say multiple people were killed in the attack, but they haven't said how many were killed or wounded. They say they believe it was carried out by a single male suspect who has been taken into custody.

Authorities believe a deadly attack at or near a shopping mall in El Paso, Texas, was carried out by a single gunman who is in custody.

Police spokesman Robert Gomez says investigators are still trying to determine what happened during Saturday's attack. He says multiple people were shot, but he didn't say how many.

City officials have said there were multiple people killed, but they didn't say how many.

State Rep. Cesar Blanco said on MSNBC that he had received reports that at least 18 people had been shot.

NBC News reports that a University Medical Center of El Paso official said it had received at least 10 seriously injured victims and that victims had also been taken to other hospitals.

El Paso, which has about 680,000 residents, is in West Texas and sits across the border from Juarez, Mexico.

Officials say multiple people were killed in an attack at a shopping complex in El Paso, Texas.

Olivia Zepeda, the chief of staff to El Paso Mayor Dee Margo, told CNN on Saturday that multiple people had been killed in the attack in or near the Cielo Vista Mall and that suspects have been taken into custody. She didn't say how many victims there were.

The police department is asking the public to stay away from the area.

Authorities haven't given any information about possible shooting victims.

El Paso is in West Texas along the border with Mexico.

Police in El Paso, Texas, say they've received reports of multiple shooters at a shopping complex and are urging the public to stay away from the area.

The police department tweeted Saturday that officers are at the Cielo Vista Mall area and that it is still an active shooter scene.

Authorities haven't given any information about possible shooting victims.

El Paso is in West Texas along the border with Mexico.

Police in the West Texas city of El Paso have responded to reports of an active shooter in a commercial area near a mall.

El Paso police tweeted Saturday that officers were responding to an active shooting scene and that people were advised to stay away from the Cielo Vista Mall area. The mall complex is near Interstate 10 and on El Paso's east side.

Police didn't immediately provide details on whether anyone was hurt or in custody.