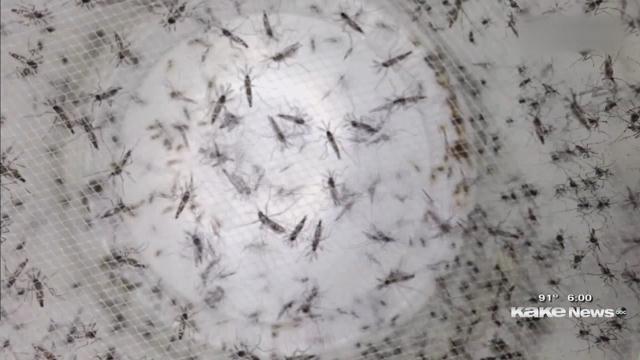 Kansas health officials are on alert after a troubling find in Reno County.

In late June, the Department of Health and Environment trapped the most mosquitoes its ever found in its history of studying them in Kansas.

The big concern is these mosquitoes can carry West Nile Virus and other diseases.

The plan is to spray the areas to kill adult mosquitoes.

But before the KDHE can do that, it has to get permission from cities in Reno County.

Health officials are blaming recent rain and flooding for the increase in mosquitoes.

"That's the kind of mosquito that's gonna bite you and can potentially transmit viruses," says Sheri Tubach, with the KDHE.

Those viruses include West Nile and Saint Louis encephalitis, which can be deadly to humans and horses.

"We get concerned when there are really high numbers of mosquitoes, and we want to rapidly reduce those numbers as quickly as possible."

The KHDE's plan is to spray Reno County with adulticide, to get rid of as many mosquitoes as possible.

But before the state can do that, it has to get permission from cities and towns in Reno County.

At the Reno County Commissioners' meeting this week, Sheri Tubach explained the problem and took questions about costs and risks.

"What happens to individuals," Bob Bush, Reno County Commissioner asked, "who get this on their skin, or in their eyes?"

Tubach says adulticide is safe, and it should take just one spray, done at night, to help control the mosquito population.

The KDHE will still have to get permission from the FAA for the aerial spray.