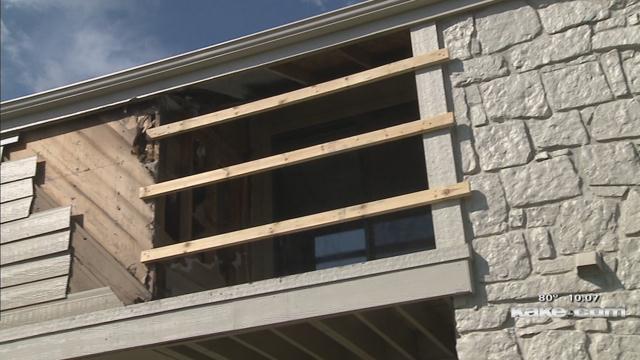 Firefighters raced to the scene of an apartment fire at the Silver Springs Apartment complex, where Jordan Cameron was still inside his own unit, just a floor below the flames.

"All of a sudden, I get a knock at the door...For a moment, I thought to ignore it, then I came out and opened up the door, and I was like, I smell smoke," says Cameron.

Crews were at Silver Springs within minutes, and the fire was put out, but not before it did $35,000 worth of damage.

"I was just at the mercy of someone else's irresponsibility," says Cameron.

Investigators say they found cigarette butts on the apartment balcony where the fire started.

"It's more prevalent it seems in the summer months, when we have the higher winds and drier conditions," says Wichita Fire Chief, Stuart Bevis.

Fire officials say the fire at Silver Springs was the 9th this year alone caused by careless discarding of cigarettes.

"When you throw so many in a careless manner, eventually one is going to catch fire," says Bevis.

"Smoking kills in more than one way...It kills individuals, it can kill other people, second hand smoke. Causing fires, just, you have to be responsible and think of others," says Cameron .

Chief Bevis says many people try and put their cigarettes out in a gardening pot, thinking the flame will go out, but he says the soil will smolder and can eventually cause a fire.

"Make sure that the cigarettes are out in a lidded container or even better, soaked in water," says Bevis.

Cameron says he was lucky. He made it out quickly, with his wallet, ID and his dog, Scooter, in tow.

"She was the most important thing. She was in the left hand, the other two were in the right," says Cameron.

According to fire officials, the nine fires this year caused by cigarette butts caused almost $1 million in damage.