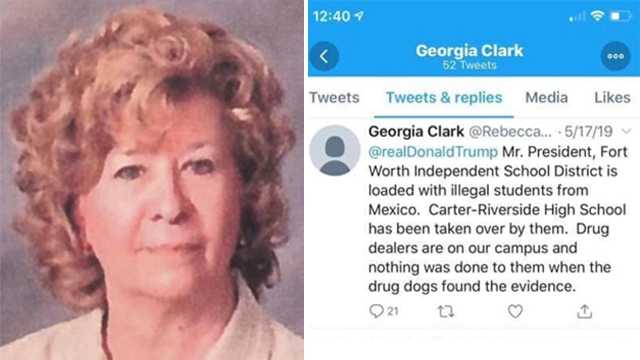 A high school English teacher in Texas was fired for tweets about “illegal students” she thought she sent privately to President Donald Trump.

Board members from the Fort Worth Independent School District voted unanimously Tuesday night to fire teacher Georgia Clark after she posted a string of comments about illegal immigration from a now-deleted Twitter account.

More than a dozen people spoke at the school board hearing, none of them in defense of Clark.

"Her comments were hurtful, irresponsible, misleading and disrespectful to the students she is supposed to protect and educate,” one concerned citizen said.

The school board made the decision after Clark admitted to district investigators she sent a series of tweets to Trump last month but thought they were private.

Board has voted to terminate contract of teacher Georgia Clark for good cause. Motion made by Trustee Paz. Second by Norman Robbins. Motion passes 8-0

One of those tweets said the school district is “loaded with illegal students from Mexico.”

“I really do need a contact here in Fort Worth who should be actively investigating and removing the illegals that are in [the] public school system,” another read.

Superintendent Dr. Kent Scribner says after the tweets came to light, other allegations did too, and Clark’s termination was “in the best interest of the district.”

Clark has the right to appeal the board’s decision to the Texas Education Agency commissioner within the next 15 days.

Jacinto Ramos Jr., the school board president, assured parents and students that Clark’s tweets would not affect the district.

"The U.S. Supreme Court has expressly held that no student may be denied a public education based upon their citizenship status or lack thereof. We wish to ensure these students and their parents and/or guardians that all students are welcome in Fort Worth ISD,” he said.

The district says Clark was nearly terminated in 2013 for an incident in which she used racially-insensitive language.

Students said Clark separated her class into two sides – with “Mexicans” on one side and white and black people on the other. She then said the “Mexicans” needed to cross the border to come to America.

A teachers group helped Clark remain with the district at that time.