The Latest: 12 killed, 5 injured in shooting in Virginia Beach 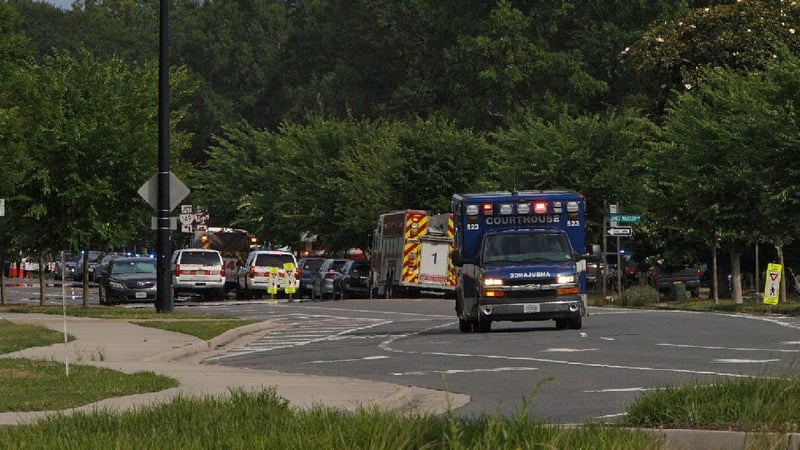 The Latest on a shooting at a municipal center in Virginia Beach (all times local):

Virginia Beach police say they have identified the suspect in a shooting that left 12 dead but have not released his name because they haven't been able to notify family members.

Police Chief James Cervera said when he does release the name, it will be only once. He said after that, "he will be forever referred to as the suspect because our focus now is the dignity and respect to the victims in this case and to their families."

Cervera said the suspect was a longtime employee of the Public Utilities Department.

Police say the victims of a shooting at a Virginia Beach municipal center were found on three floors and one victim was shot in car outside the building.

Police Chief James Cervera gave the details in a Friday night news conference, hours after the shooting, which killed 12 people.

He says a long gun battle erupted between the shooter and four police officers. Police aren't naming the suspect, who was killed as authorities returned fire.

The death toll from a shooting at a Virginia Beach municipal center has increased to 12.

Police Chief James Cervera says the 12th victim in the Friday shooting died on the way to the hospital. He gave the latest details on the incident in a news conference.

He said officials won't be releasing the name of the suspect, who was killed by authorities returning fire.

The police chief says the gunman used .45-caliber handgun with a suppressor. Unlike some states, silencers are legal in Virginia, though it is illegal to have one in Virginia Beach per local ordinance.

Virginia Gov. Ralph Northam says he is devastated by the shooting that left 11 dead at a Virginia Beach municipal center and is offering the state's full support to shooting survivors and relatives of the victims.

Northam said in a statement that he was in Virginia Beach with law enforcement officials. He said the entire state is "devastated by the tragic shooting" and he decried the "unspeakable, senseless violence."

The White House issued a statement saying that President Donald Trump had been briefed on the shooting "and continues to monitor the situation."

Virginia Beach native Pharrell Williams says he is praying for his city and all of the victims of a shooting that left 11 people dead.

Williams recently held a three-day music festival in the city. On Friday, a city employee opened fire at a municipal center miles from the beaches and the downtown business area. Eleven people were killed before police fatally shot the suspect.

Williams noted the city's resilience, and said its people will "come out of this stronger than before."

Survivors of a mass shooting at a Virginia Beach municipal center are reuniting with friends and relatives at a middle school.

Paul Swain was among those who arrived at the Princess Anne Middle School to reunite with loved ones who were in the municipal building during the shooting.

Swain said he saw his fiancee across the parking lot, clearly in an agitated state. He said he thinks she knew some of the people who were hurt or killed.

The school's parking lot was filled with police and civilian vehicles.

Police say 11 people have been killed and six others injured in a mass shooting at a municipal building in Virginia Beach.

Cervera said police returned fire, killing the suspect. He said the suspect was a longtime employee of the city's Public Works Department. One of the people shot is a police officer.

Hospital officials say six people have been wounded in a shooting at a municipal center in Virginia Beach.

Sentara Healthcare said on its Twitter account that five people were taken to Sentara Virginia Beach General Hospital and a sixth patient was taken to Sentara Princess Anne Hospital after the shooting just after 4 p.m. Friday. The company said the sixth patient was being transferred to the Level 1 Trauma Center at Sentara Norfolk General Hospital.

Virginia Beach police said a suspect was taken into custody after the shooting. They said they believe there was only one shooter.

Police in Virginia Beach say a shooting at a municipal center has left multiple people wounded. They say a suspect has been taken into custody after Friday afternoon's shooting and they believe there was only one shooter.

There was no immediate word on the extent of injuries.