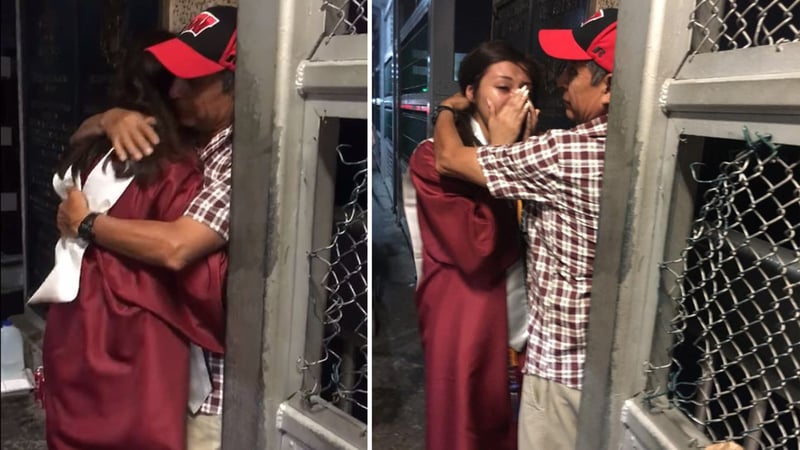 Sarai Ruiz received her high school diploma at a graduation ceremony in Texas last week. But one of the most important people in her life, her dad Esteban, could not attend.

"He was deported from the US when I was about four," Ruiz told CNN En Español. The whole family now lives in Nuevo Laredo, Mexico, and Ruiz had to cross the border daily to attend Hector J. Garcia Early College High School in Laredo, Texas, she said.

"My whole life, I had always thought that my whole family was going to be there. Unfortunately, my dad couldn't be there because he can't cross (the border)," she told CNN affiliate KGNS.

So after the graduation ceremony, 18-year-old Ruiz -- still wearing her cap and gown -- walked up Puente de Las Americas (Gateway to the Americas Bridge) on the US and Mexico border to greet her father and celebrate with him.

Ruiz posted a video of the meeting on Facebook, where it went viral, gathering more than 3 million views. It shows father and daughter exchanging a long embrace amid their tears.

"I knew my father would never see me walk to get my diploma but today I'd thought I'd surprise him by crossing the bridge so he could see me with my cap and gown," she wrote in the post accompanying the video.

After the hug, her dad said: "Nobody could ever separate us, only God," Ruiz revealed.

The student was born in Sheboygan, Wisconsin, where she lived for her first 7 years. After her dad was deported, it was just her and her mom, who is a US citizen, for a while. The family first moved to Laredo to be closer to Esteban, but eventually crossed the border to Nuevo Laredo, Mexico, to be together again.

"It's hard to wake up early, like at 5 a.m. just so you can cross and go to school, and then cross back in the afternoon," Ruiz told KGNS.

Ruiz will attend the University of Texas at Austin to study psychology and government, she said.