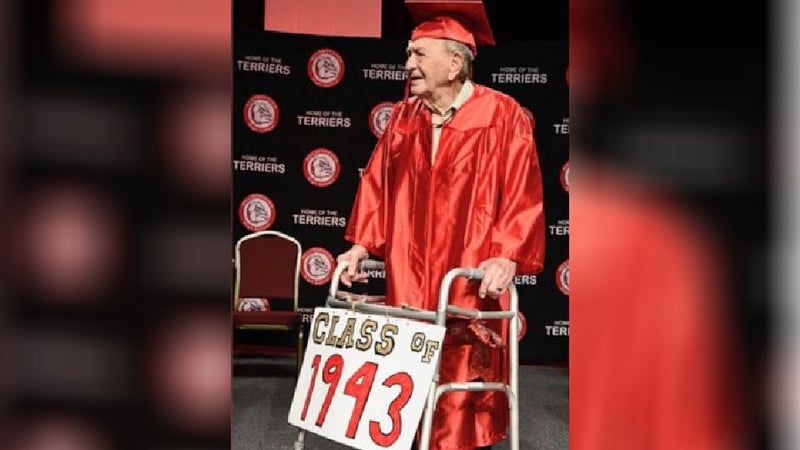 Joe Perricone was in the middle of his senior year of high school and looking forward to graduating with the Class of 1943 when he was drafted into World War II.

Perricone, who was attending Hillsborough High School on the west coast of Florida, said he'd wanted to wait till after he'd graduated to enter the armed services but the world was at war.

At the age of 19, he was sent to basic training, and then overseas.

On Saturday, however, the school and his family helped now-95-year-old Perricone finally reach the milestone he'd left behind all those decades ago: walking across the stage and receiving his diploma.

Perricone fought with the U.S. Army in World War II, facing off against the Germans. He traveled through France, Belgium, Denmark and the U.K. before he was able to return to the U.S. after 1945.

A handkerchief from his fiance, Hope, kept him sane through the misery, he said, before he was honorably discharged in 1946.

By the time he'd returned home, he was beginning his life with Hope, who he married, and thoughts of graduating become a distant memory.

But after 76 years, Perricone, 95, walked across the stage Saturday to receive his diploma at the Florida State Fairgrounds with the rest of the school's Class of 2019.

Before the ceremony, he visited the school for the first time in more than seven decades to pick up his cap and gown from principal Gary Brady.

"I think it means the world to see someone we love very much getting to live out a part of his dream," his grandson Tom Palermo, a circuit-judge, told ABC News affiliate WFTS-TV in Tampa Bay.