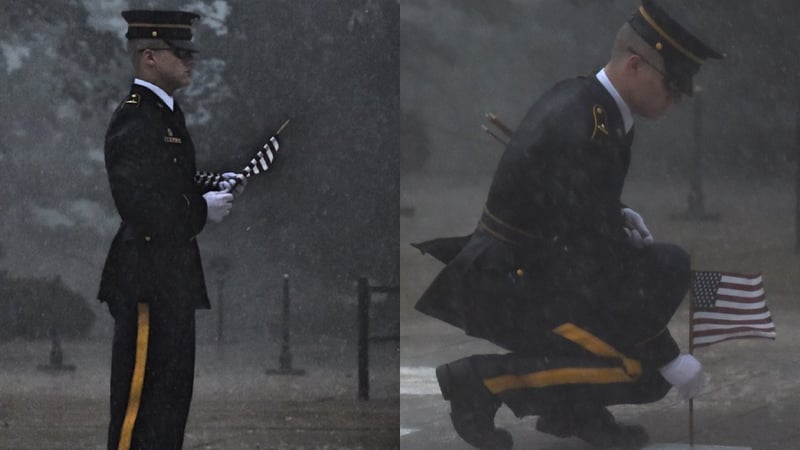 When a severe storm swept through the Washington area before the start of Memorial Day weekend, it didn't stop the 3rd US Infantry Regiment from placing flags at the graves of fallen soldiers, including at the Tomb of the Unknown Soldier.

The regiment, known as The Old Guard, is responsible for carrying out the annual military operation of planting flags at every grave in Virginia's Arlington National Cemetery before the holiday weekend. The tradition started when soldiers at Fort Myer decided to ensure every fallen service personnel had a decoration on their graves. The soldiers plant 245,000 flags every year.

This year the weather tried its best to interfere in the tradition. Maj. Stephen Von Jett, public affairs director for the regiment, told CNN that some soldiers had to be ordered to stand down from planting flags Thursday so determined were they to finish their job despite the storm.

But the torrential downpour didn't deter one soldier from displaying his patriotism.

"With only a few watching from cover, a Tomb Sentinel approached the Unknowns with (US) flags in hand," the 3rd US Infantry Regiment said in a Facebook post. "As thunder shook the ground and rains washed down without abandon, the Tomb Sentinel pierced through the elements with breath-taking precision."

His selfless display remained anonymous, Jett said, since the Tomb Sentinels don't identify themselves out of respect for the unknown soldiers.

Despite the heavy rain, thunder and darkened skies, the solider in the Facebook photo appeared unfazed by the elements.

"Humans have their limits, but The Old Guard has yet to meet theirs," the regiment noted in its Facebook post.