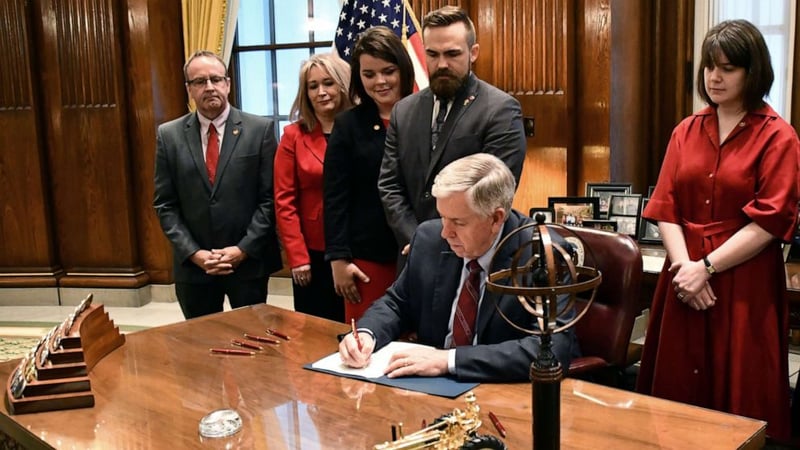 Missouri Gov. Mike Parson signed a bill on Friday that bans abortions at eight weeks of pregnancy, without exceptions in cases of rape or incest, among other stipulations and restrictions.

The state's new abortion law, which is not scheduled to be in effect until Aug. 28, is among the strictest in the nation. Last week, Alabama's governor signed a bill baring abortions in nearly all cases, though it was challenged by the ACLU and Planned Parenthood on Friday.

Missouri's Republican-controlled state legislature approved the bill, known as the "Missouri Stands for the Unborn Act," earlier this month. The legislation allows abortions to be performed after the eight-week cutoff only in cases of medical emergencies, such as when a pregnant woman is at risk of death or permanent physical injuries to "a major bodily function."

The bill also bans abortions done on the basis of the race or sex of a fetus or a diagnosis or screening indication of Down syndrome and changes a parental notification requirement for minors seeking abortions in the state. Previously, only one parent needed to provide written consent. Under this bill, both parents of a minor would need to be notified.

Additionally, the bill includes a "trigger" function, meaning if Roe v. Wade -- the landmark 1973 case that codified abortion as a protected right nationally -- gets overturned, abortion will become illegal in the state.

"By signing this bill today, we are sending a strong signal to the nation that, in Missouri, we stand for life, protect women’s health, and advocate for the unborn," Parson said in a statement Friday. "All life has value and is worth protecting."