Bernie Sanders: Banks have been ripping off Americans for too long. I have a plan to end it 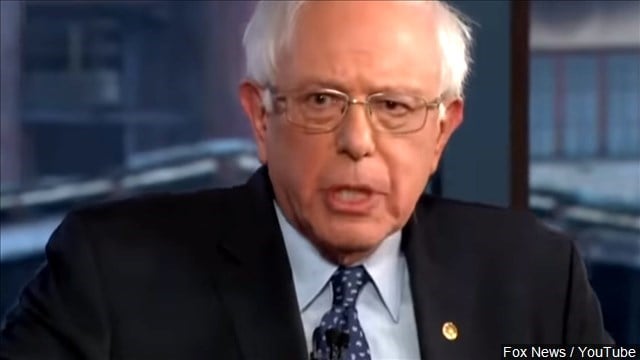 The Federal Reserve recently reported that about half of Americans have virtually no wealth at all, with four in 10 unable to afford a $400 emergency expense. That means that if their car breaks down or their child gets sick, they have to charge those expenses to a credit card.

And when they do that, they get ripped off — big time. Despite the fact that banks can borrow money from the Fed at less than 2.5%, the median credit card interest rate — which is the rate most new cardholders receive — is now over 21%. Last year, Wall Street banks made $113 billion in credit card interest alone, up by nearly 50% in just five years, and accelerating, according to an analysis of FDIC data. In other words, while working class Americans pay outrageously high interest rates, Wall Street banks get rich.

If you use a credit card from a department store like Macy's or Kohl's, it's even worse. The average interest rate on a retail credit card is over 27%. That means if you buy a $500 refrigerator, you could likely owe an additional $136 in interest over a year's time.

And if you live in a low-income community without a bank or cannot get a credit card, what do you do when you need to borrow money? You may have to turn to a predatory payday lender where the average interest rate on an annual basis is a jaw-dropping 391%— meaning that you would pay $520 in fees for a loan of just $375.

Make no mistake about it. When banks and payday lenders charge these unconscionably high interest rates, they are not engaged in the business of making credit available. They are involved in extortion — squeezing working families that are already in financial distress down to the bone. That should not be happening in the United States of America.

Today's modern-day loan sharks are no longer lurking on street corners breaking kneecaps to collect their payments. They wear Armani suits and work on Wall Street, where they make obscene compensation packages and head financial institutions like JPMorgan Chase, Citigroup, Bank of America and American Express.

If you read the tenets of the major religions throughout history, whether it is Christianity, Judaism or Islam, what you will find is a universal moral condemnation to usury.

And that's exactly what the legislation I introduced with Representative Alexandria Ocasio-Cortez would do. Under our Loan Shark Prevention Act, we would make sure that no bank or store in America could charge an interest rate higher than 15%.

This is not a radical idea. According to a recent poll, 88% of Americans support a cap on credit card interest rates. Over 20 states in America have laws preventing credit card companies from charging outrageously high interest rates. In Alabama, the legal maximum interest rate is 8% and in Vermont it is 12%.

But, those state usury laws were obliterated by a 1978 Supreme Court decision known as Marquette National Bank of Minneapolis v. First of Omaha Service Corp. The Court ruled that banks can charge whatever interest rate they want if they moved to a state like Delaware or South Dakota that doesn't have a usury law, preempting other states' protections.

Under our legislation, not only will we cap credit card interest rates nationally at 15%, we will also empower states to pass and enforce interest rate caps that are below 15% by repealing this disastrous Supreme Court decision.

Given that reality, if we are going to create a financial system that works for all Americans, we have got to stop financial institutions from charging sky-high interest rates and fees.

We did not pick a 15% national usury rate out of a hat. Since 1980, credit unions in the United States, by federal law, have been prohibited from charging interest rates higher than 15%, except under extraordinary circumstances. It's time to apply that law to private banks as well.

Wall Street and its representatives on Capitol Hill will retort that the business of banking is expensive. The big banks, they will claim, must charge outrageous fees to consumers in order to stay afloat, even as they have benefitted from taxpayer bailouts, sit on trillions of dollars in assets and reap higher and higher profits from credit-card interest payments every year. The payday-loan apologists will similarly argue that their industry's insane interest rates are still better than illegal alternatives on the black market.

In my view, the solution is obvious. We must make sure that giant Wall Street financial institutions and payday lenders are not the only way Americans can gain access to banking services. We must provide affordable banking options to every person in this country by allowing the more than 30,000 post offices in America to offer basic financial services.

Today, the vast majority of postal services around the world allow their customers to do some form of banking. There are 1.5 billion people worldwide who bank with postal services. The American people should have this option as well, just as they have in the past. Starting in 1911, the US Postal Service offered banking services, and at its peak deposit levels in 1947, the Postal Service had more than 4 million people utilizing its financial services. It was phased out in 1967, an era in which financial crises did not regularly occur. The same logistical know-how that the Postal Service draws on to promptly deliver packages, large and small, anywhere in the country, can surely be used to launch and expand affordable checking, savings, wire-transfer, ATM and small-loan services across America.

The American people are sick and tired of being ripped off by the same financial institutions that they bailed out 10 years ago. We need to put an end to predatory lending and provide affordable banking options to all Americans.