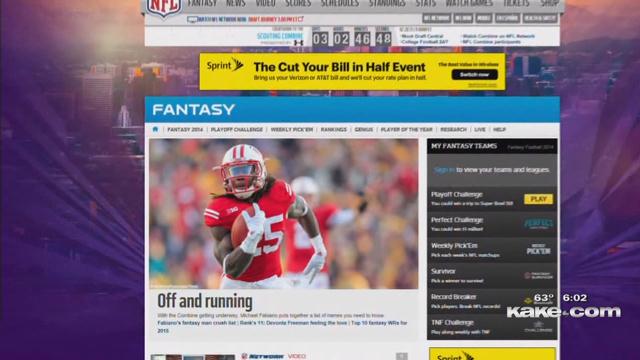 The NCAA tournament started Thursday around the country and people are placing bets on their brackets to win money.

Watch parties and being with friends and family are one part of the NCAA tournament. One person in Wichita said he drove from Minnesota to watch with his friends.

Some people fill out brackets and pick teams to win all the way to picking the national champion in April.

"I think just the trash talking about the brackets, see who goes furthest and most wins," said Matt Mies, a local resident who watches the tournament. "It's just about bragging rights."

Bets are also placed on these brackets between friends and on websites such as ESPN, CBS Sports, or Yahoo Sports.

"I definitely like to gamble a little bit," said Bryndon Moussavi, another local resident who watches the tournament.

According to the American Gaming Association, 47 million Americans will bet near $8.5 billion on this years NCAA Tournament. Moussavi said, it's all for fun.

"It's just fun, win, lose, typically you're out by the first day but you know if you make it into day two, three, it's pretty cool," he said.

However, most people don't know gambling like this is illegal in the state of Kansas. Regardless of if it's on a previously mentioned website in a state where it's legal, or between friends, Dan Monnat, a local lawyer, said it is still illegal.

He said it is legally considered a bet because there are things the person can't control. He mentioned the referee's, injury and illness as factors that make it a bet by chance.

The Supreme Court ruled that it was unconstitutional for federal law to prohibit states from legalizing sports gambling, but Kansas has not legalized it yet. Monnat said it's just a matter of if prosecutors want to take the case.

"We have seen federal prosecutors in Kansas go after sports betting within the last four or five years," he said.

Some states have legalized sports gambling, according to Monnat. Nevada, New Jersey and Delaware are a few named by Legalsportsreport.com. He said something could be in the waiting to legalize it, but he said he did not know if anything was.