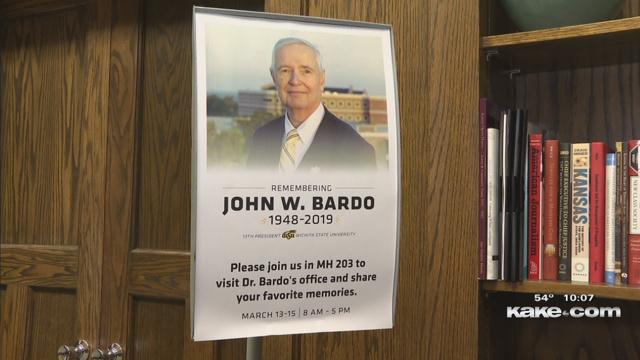 Wichita State University's President, Dr. John Bardo has died at the age of 70.

Bardo became president at Wichita State University in 2012, but WSU wasn't new to him then.

"He has a long connection to Wichita State. Came here in 1973 and met his wife here," says Provost and acting President, Rick Muma.

Bardo had struggled with complications from chronic lung illness for months and died Tuesday after being hospitalized again.

Colleagues remember Bardo for his unbridled ambition for WSU.

"You can drive around this campus and it's very very different than it was 6 and a half years ago when he arrived," says Lou Heldman, Vice President of Strategic Communications.

One of the most dramatic changes was the university's Innovation Campus. which includes the Wichita-Sedgwick County Law Enforcement Training Center, Engineering buildings and a YMCA Student Wellness Center. New additions are still being added.

"He never thought about doing anything just for Wichita State. He thought whatever we did needed to be done for the whole community," says Heldman.

Provost, Rick Muma, has been acting President since January. He says he's honored to walk in Bardo's shoes and carries the President's devotion with him.

"We could have just opened the new dorm and he'd come back to his office, and just say what are we going to do next?," says Muma.

But Bardo didn't just have devotion to the university. He also believed in the future of his students.

"We didn't have student workers in his office. The next thing I know, the president came here and it was full of student workers. He said those are the people we need to be around," says Muma.

"He would end all of his speeches, 'it's a great day to be a shocker' and he believed it," says Heldman.

The Bardo family will hold a private funeral and there will be a celebration of life open to the public at WSU later this Spring. The Kansas Board of Regents has not announced plans to find a permanent replacement for the President.