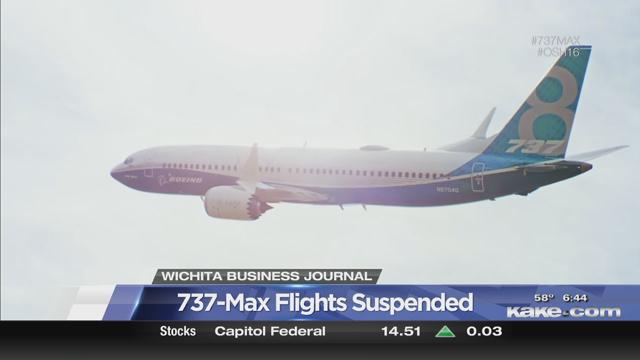 Several U.S. senators are now calling for the United States to join much of the rest of the world in grounding the Boeing 737 MAX 8s in the wake of Sunday's crash in Ethiopia.  It's the second MAX 8 to crash, killing everyone on board, in less than six months.

But, members of Kansas congressional delegation say it's too soon to make assumptions about the plane's safety.

Investigators are working to reconstruct what's left of the plane and learn what's recorded in the black boxes that they recovered Monday.

In the meantime, several countries and airlines have grounded the aircraft, saying it's better to be safe, than sorry.  At this point, only the U.S. and Canada have substantial numbers of the MAX 8 in the air.  Boeing's stock closed down for a second day in a row Tuesday.  It fell 6.15%.

Representative Ron Estes, (R) District IV, told KAKE News, “The United States has the highest aviation safety standards in the world and I have continued confidence in the aircraft manufacturers and the FAA, which has reiterated its commitment to safety and oversight of all U.S. aircraft.  While an investigation is ongoing into Sunday’s tragic crash, I will continue to rely on the expertise of the FAA and ensure safety standards are upheld.”

Both Kansas senators also expressed their trust in the FAA during this investigation.

"The FAA and the NTSB are investigating the Ethiopian Flight 302 and should any concern for safety arise, they will take immediate steps to protect the American people," Sen. Pat Roberts, (R) Kansas, said. "I will closely monitor the investigation as it progresses."

Sen. Jerry Moran,(R) Kansas, said “I trust that the FAA and NTSB, as our air safety regulators, will continue to extensively review the crash and take swift and appropriate action where they deem necessary.”

Sen. Moran also said the Senate Commerce Committee is planning a hearing to learn more about the investigation.

Spirit Aerosystems in Wichita makes the fuselages for the MAX 8.