Middle school students use knitting to give back 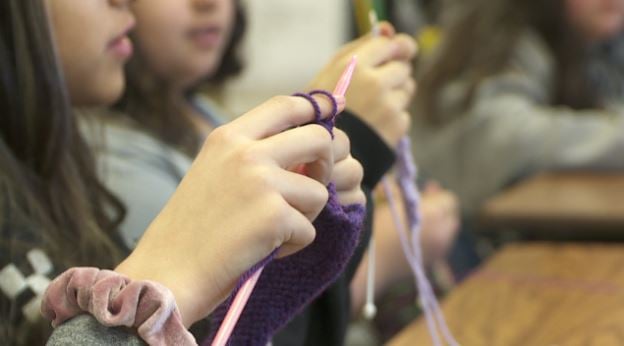 Giggling and the sound of knitting needles clicking together. It's what you'll hear in Ms. Haney's knitting class every morning.

Before this school year, students at Mayberry Cultural and Fine Arts Middle School were brand new to knitting, but one student, Sophia, took to the skill almost immediately. Her classmates call her a master.

"I've been kind of a natural a little bit," says Sophia.

Sophia even inspired her mom, Emily, who's blind, to pick up knitting.

"She was like relentless. She was like, you're gonna do it. Here's the mistake you made and let's fix it."

Suzanne Haney teaches the class. She says she was surprised at how quickly Sophia and her classmates took to knitting, but not in the way she expected.

"I started off thinking they were going to want to knit for themselves, but actually, their hearts has been completely in charity knits."

Their most recent project, purple hats for newborn babies.

"We're making them for a reminder for young moms that way they don't shake their babies when they're crying," says Monique Martinez, a student at Mayberry Magnet.

Students say they're honored to be able to use their skills to give back.

"There's a lot of people who need and they don't have that certain stuff and they can't afford it, so I like that we get to help people in our neighborhood and our community."

The Wichita Knitters' Guild and South Central Knitters' Guild donated yarn and needles to Mayberry Middle School Magnet. They meet monthly and Sophia and her mom have even joined.