Officer killed by driver who was texting leaves behind wife, 10-month-old son 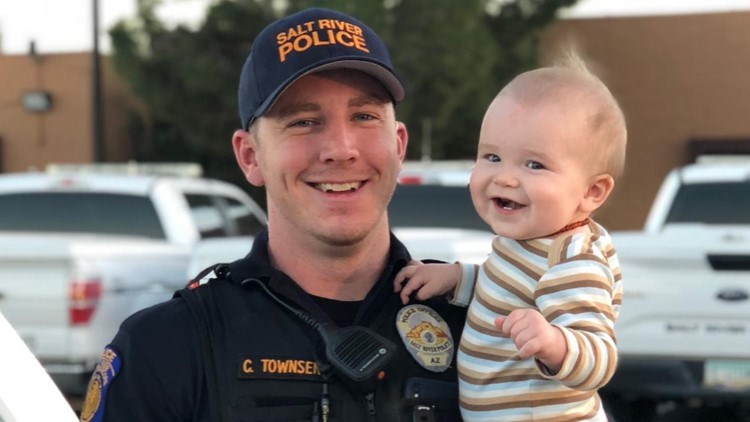 A Salt River Police Department officer was killed in a crash on the Loop 101 Tuesday.

According to Arizona Department of Public Safety, the officer stopped a vehicle on the Loop 101 around 6 p.m. While out standing with that vehicle, the officer was hit by a passing vehicle, which then hit the vehicle the officer had stopped.

The driver who killed the officer admitted to authorities that he was texting while driving, according to a release Wednesday morning.

DPS says the officer, later identified as Clayton Townsend, was taken to a nearby hospital and pronounced dead shortly after 6:30 p.m.

The crash and subsequent investigation blocked several lanes of the loop 101 northbound near McKellips Road.

In a briefing Tuesday night, Townsend was described by Salt River Police Chief Karl Auerbach as "one of the most dedicated, loyal, and committed officers" who left behind a wife and a 10-month-old child. He had been with the department for five years.

Tributes from other Arizona law enforcement agencies started shortly after news broke of the officer's death.

Police identified the driver of the vehicle as 40-year-old Jerry Sanstead of Scottsdale.

Sanstead was brought into custody on charges of manslaughter, aggravated assault with a deadly weapon, and endangerment.

“There’s truly no word in any human language that is describing the pain that we’re going through,” said the officer's mother, Toni Townsend. “There’s no text that is so important that it can take a father away from their wife or a dad away from their son."

KTVK contributed to this report.