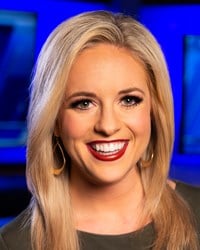 Morgan joined the KAKE News team in December of 2018.

A Kansas girl at heart, Morgan was born and raised in Overland Park, and graduated from Kansas State University where she earned a Bachelor of Arts degree in Public Relations.

Morgan’s first taste of broadcast journalism came during an internship her senior year at KSNT TV, in Topeka, Kansas. After graduation, her love of journalism would soon lead her to Sioux City, Iowa for a multimedia journalist position at ABC Affiliate station KCAU 9 News, where she did it all from reporting, editing, to producing and anchoring.

After nearly two years in Iowa, Morgan has returned home to the sunflower state, as a talented anchor and a versatile reporter, whose able to cover everything from breaking news stories, to politics and feature stories.

Morgan considers her work in the community as some of her most rewarding assignments, frequently giving her time to community organizations, and charitable programs.

When she's not at work you can probably find Morgan exploring the city with family and friends or curled up with a good book.

Morgan is thrilled and grateful to tell stories about the people and places she so is incredibly passionate about. Be sure to follow her on Twitter and Facebook to get the latest of what she’s been working on.