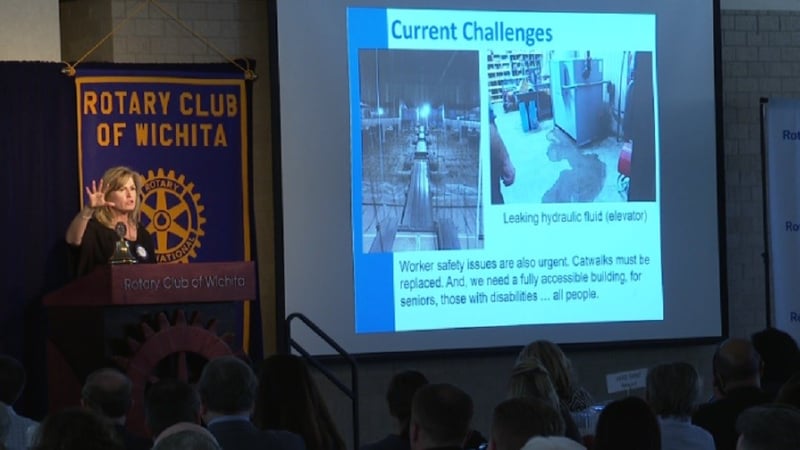 Volunteers of the Century II Citizens Advisory Committee discussed the future of Century II and plan to have a recommendation for the nearly 50-year-old building by the beginning of the year.

Among the challenges of the deteriorating building include: asbestos, leaking roof, ADA compliance, over 20-year-old HVAC equipment on roof of building, and other challenges for arts organizations that use the building simultaneously.

"People have opinions but I'm not sure they quite understand the exact state of Century II and the choices we actually have before us. Coming here to Rotary, with all of these business leaders, community icons, folks that are interested in a vibrant future looking Wichita, was a great place to sort of get out and start to spread the word," said Mary Beth Jarvis, chairman of the Citizens Committee.

The committee will provide a recommendation of either building new or renovating the nearly 50-year-old building.

A cost estimate has not been provided but Jarvis said fixing the structural problems will cost at least $100-million.

"This is going to be a sizable investment. Is it going to be $200-million? Is it going to be north of that? We don't know. We'll see how the numbers come out. But it's not  going to be something we can do without proceeding thoughtfully and without folks getting engaged and educated and involved," said Jarvis.

Century II, which included concert hall, convention hall, exhibition hall, and a theatre, opened its doors on January 11, 1969. The expo hall was later built in 1986.

The committee will be presenting to all the Wichita District Advisory Board meetings during the first week in December.

To provide input to the committee, email CenturyII@wichita.gov.