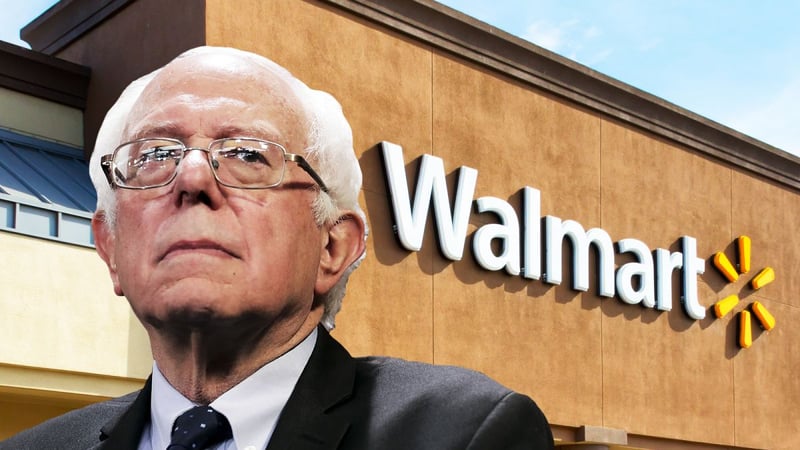 Fresh off a campaign to get Amazon to raise its minimum wage, Senator Bernie Sanders is now shining his progressive spotlight on Walmart.

Sanders on Thursday introduced a bill, titled the Stop Walmart Act, that would prevent large companies from buying back stock unless they pay all employees at least $15 an hour, allow workers to earn up to seven days of paid sick leave and limit CEO compensation to no more than 150 times the median pay of all staffers.

Calling Walmart the poster child for corporate greed, Sanders noted that the company made $13 billion in profits last year and paid CEO Doug McMillon more than $22 million, or 1,188 times its typical worker, who earned $19,177.

The Walton family of Walmart is the wealthiest family in America, worth $180 billion. Middle class taxpayers should not have to subsidize Walmart’s horrendously low wages to the tune of at least $6.2 billion every year.

Walmart, which this past February raised its minimum wage to $11 an hour, said it offers competitive wages and benefits, as well as the opportunity to advance and earn higher pay.

"We have increased our starting wages by more than 50% in the last three years and currently have an average hourly total compensation of more than $17.50 an hour," the company said in a statement. "At the same time, we've also added new benefits like paid time off, advanced job training, paid family leave and college for $1 a day."

The new legislation marks a change in Sanders' tactics for pressuring companies to raise their wages. In September, he unveiled the Stop BEZOS Act, which called for levying a tax on large companies equal to the value of the public benefits that their workers receive. A month later, Amazon announced it would raise its minimum wage to $15 an hour, starting November 1. However, it also eliminated bonuses and stock awards for hourly workers.

In a call with reporters, the independent senator from Vermont reiterated his praise of Amazon, saying that he believes every worker impacted by the change saw their overall compensation rise, with some employees seeing huge pay increases of up to 50%.

Sanders has also called out other profitable companies, including American Airlines and McDonald's, for paying low wages.

The Walmart legislation is the latest progressive effort aimed at improving the lots of low-income and working Americans. Sanders and Rep. Ro Khanna, a California Democrat who co-sponsored both the Bezos and Walmart bills, are also looking to re-introduce legislation in January to raise the national minimum wage to $15 an hour, from the current $7.25 an hour.

The legislation stands a better chance in the newly Democratic-controlled House than in the Senate, which remains in Republican hands.

President Donald Trump flip-flopped on the idea of raising the federal minimum wage during the 2016 presidential campaign, but his National Economic Council director, Larry Kudlow, recently came out strongly against increasing it.

Democrats are expected to issue a flurry of related billsafter the next term starts in January. In addition to raising the minimum wage, members will likely look to strengthen labor rights and lower health care costs.

While many of the Democrats' policy efforts next year are expected to wither in the Republican-controlled Senate, some elements may get through in legislation of interest to both parties, such as boosting infrastructure spending, said Ben Olinsky, senior vice president for policy and strategy at the left-leaning Center for American Progress.