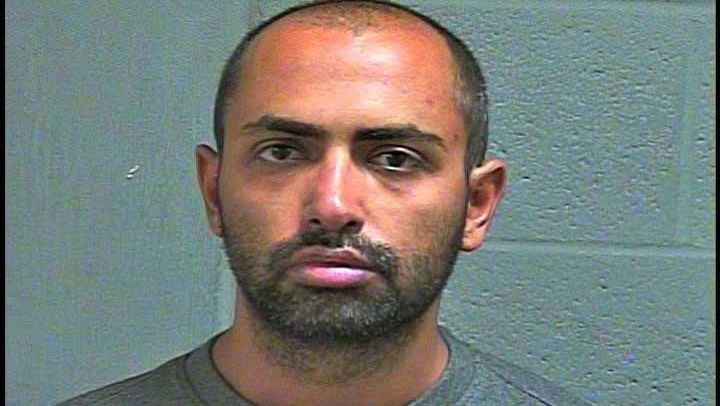 A man was arrested in Oklahoma City, on a complaint of threatening to kill by the use of explosive. Police said he was seen taking suspicious photos at the Oklahoma City National Memorial and that he called his sister in Iran to tell her that, "hundreds of people are going to die in Oklahoma City, and something very large is going to happen."

Officials with the Federal Bureau of Investigation's joint Terrorism Task Force contacted Oklahoma City police on Oct. 30, regarding a suspicious person taking photos at the Memorial. Officials said the person, later identified as Amiremad Nayebyazdi, had been seen taking photos of unusual angles and places at the Memorial on several occasions.

Security forces were able to get the suspect's Oklahoma tag number when he came back to the memorial, and tracked it to Nayebyazdi. Nayebryzdi had been arrested before on suspicion of possession of a controlled dangerous substance, driving under the influence, and public intoxication, and he had been taken into protective custody in 2014 on an emergency order of detention for a mental health evaluation.

Police said Nayebryazdi has a degree in petroleum engineering and worked for an Oklahoma City oil company.

Police said they received a call on Nov. 1 from a concerned person in California, who said Nayebryazdi had left a recorded message for his sister in Iran. Police said the recorded message was "loosely translated" by the caller, who said Nayebryazdi told his sister that, "Hundreds are going to die in Oklahoma City, something very large is going to happen, it will be on the news, and don't tell mom and dad until it is seen on the news."

The caller said they received the information from a high school friend living in Germany. All three had grown up together.

Police officers, along with a tactical team, a bomb squad, the gang unit and FBI agents, went to Nayebryazdi's home near Northwest 5th Avenue and North Shartel Avenue. A bomb-detecting K9 checked the suspect's vehicle and found no indication of of an explosive device.

Officers then went to Nayebryazdi's apartment and knocked on his door. Nayebryazdi opened the door and allowed officers inside, police said.

Nayebryazdi, police said, admitted to officers that he did tell her sister that, "hundreds of people will be dead and something big was going to happen in Oklahoma City." Officers asked him if he was talking about an explosion, and he said "yes."

Nayebryazdi also told police that he "hears things," and that he just told her this was going to happen. He said he had not made any explosive devices, according to police.

According to police, Nayebryazdi admitted to taking photos at the memorial, but he denied placing any explosives in any area that would hurt people. He told police that he did not want to hurt people, but he has had problems, authorities said.

The K-9 cleared the apartment and did not find any explosives, according to police.

A Crisis Intervention Team (CIT) officer responded and performed a mental evaluation on Nayebryazdi. He was then placed in protective custody and taken to St. Anthony Hospital for a mental health evaluation.

An arrest warrant was also issued for Nayebryazdi for the charge of threatening to kill by use of explosive.