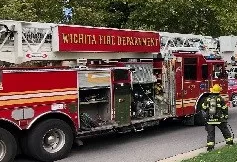 An afternoon fire breaks out inside a west Wichita home.

What makes this one so difficult to fight is what they found on the inside.

Firefighters say the home was left vacant, but it may have been occupied by a hoarder. The stuff left inside is the perfect fuel for a fire.

"Any situation where you have an excessive storage, it can delay notification,” said Wichita Fire Marshal Stuart Bevis. “It can delay evacuation or make evacuation completely impossible."

When it comes to fire safety, Bevis says hoarding can sometimes lead to tragedy for a homeowner.

"There's been times where we've taken out a view out window in the living room and we crawl in and we're crawling on four feet of stuff with the ceiling four feet above us,” he recalled.

Not only is hard to nail down the fires exact location but also to get equipment inside.

"In some instances, our crews actually just have to find where they feel the fire is at,” Bevis stated. “We've even in the past cut exterior holes in the wall to pull the wall out and get to the area."

While no one was injured in this fire, things don't always turn out that way.

Back in June, an elderly woman died after a fire broke out in her north Wichita home.

And last year, a man in south Wichita died in an excessive storage fire.

Both showing just how dangerous having too much stuff can be.