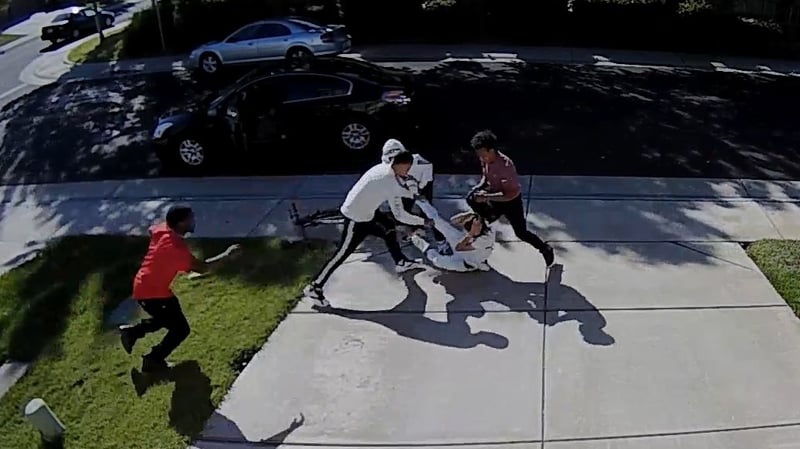 Chilling video captured by a home surveillance camera in California shows a 12-year-old boy being ambushed, attacked, and robbed.

The video shows the boy getting jumped by a group of teens as he was biking home from school Friday.

Those teens were arrested Monday.

"I saw three guys running towards me, the driver he pushed me down into the floor and all came and tackled me," the boy said.

The 12-year-old recalled last Friday when a neighbor's security video shows him being attacked by a group of teens.

"I thought I would like get murdered because I didn't know if they had a weapon or not."

The 8th grader says he was biking home from school when he was followed by the teens.

The victim says one of the suspects asked him what kind of phone he had then the attack began.

But the young victim wasn't the only one who saw these teens allegedly stalking their prey.

"I saw the car proceed to follow the kid just saw the way they were looking Adam in the discomfort on his face," said Orlando Martinez, who stopped the attack.

It worked -- you can see the suspects jump back into their car before taking off.

Having his shoes and phone stolen, but relatively okay, the 12-year-old says Orlando saved him, not knowing how much longer the attack may have carried on.

"If he didn't honk his car they may have done worse."

"I thought like what if it was one of my family members I would want him to do that from my family so I thought I would just return the favor," Martinez said.

The four teens -- three 17-year-olds and one 16-year-old -- are all booked at the Sacramento County Juvenile Hall.