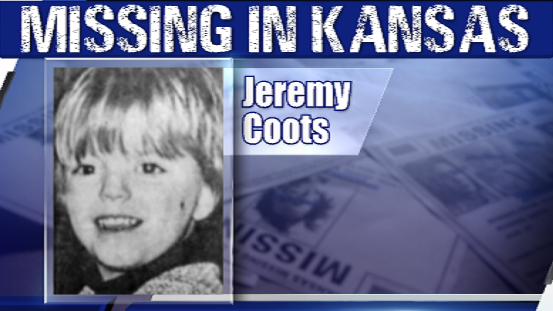 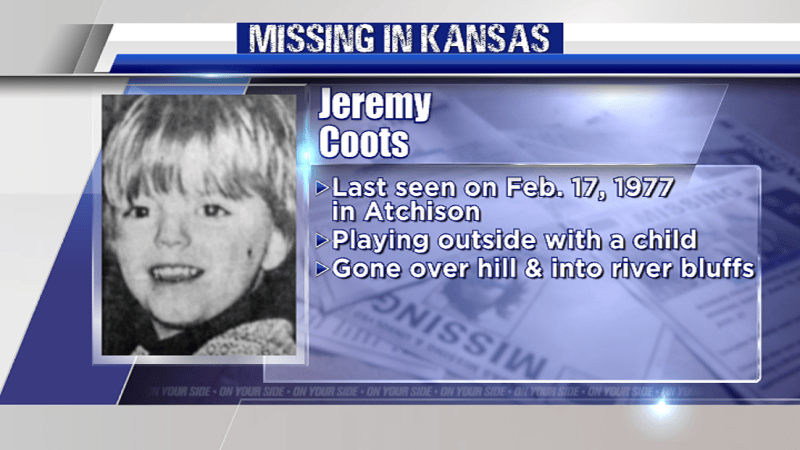 A northeast Kansas boy spent the day at his babysitters – only never to be seen or heard from decades later.

On Feb. 18, 1977, Jeremy Coots was taken to his babysitter’s house. The community was expecting a blizzard, but the weather turned out to be nice. Jeremy and the babysitter’s son, both 4, went outside to play.

“They supposedly got into a fight, and Jeremy went into one direction and Jimmy tried to follow him and he couldn’t find him,” said Jeremy’s mom Melodye Hathaway. “So he went back home and told his mom that Jeremy had went over the hill and well, that meant towards the river.”

The babysitter, then, ran out to look for Jeremy, who is also deaf, near her home about a mile south of Atchison, Kan. The babysitter put a call out on the CB radio. Jeremy’s dad rushed from work to the babysitter’s house. He called Hathaway, who was nine months pregnant and at work.

“He said don’t’ worry about it Melodye,” she said. “It’s 3 o’clock now. Finish your other two hours, come home at 5, and Jeremy and I will be sitting there waiting for you. I said ‘I’ll be right there,’ and that’s where the nightmare began.”

The search turned massive, with hundreds of people searching the area. They did everything they could to bring the brown-haired, blue-eyed boy home. From the sheriff’s office to the Kansas National Guard to a specialty search team from Florida – many offered their services.

Search dogs kept looking in the wooded area near the babysitter’s home. The county sheriff put an end to the search, believing Jeremy had fallen into the Missouri River. Crews dragged the river but did not find anything.

Jeremy’s mom said though it’s likely that her boy did drown, there were railroad tracks nearby. A child’s footprint was found near there. She wonders if a person kidnapped her son. If alive, he’d be 46 years old – just having a birthday in late October.

“So we waited, and waited and waited, and we still don’t have closure. I don’t know. I’m a mom, so part of me wants him to be alive, Hathaway said. “Maybe someone on the railroad did get him, maybe his is somewhere. But, he probably went into the river. “

“I would like some sort of closure before I die,” she said. “I bought a grave and a gravestone because I didn’t want to have to do that when they found him. I wanted to have that done. I would like to put him in there.”

In the decades since his disappearance, Hathaway does everything she can to pay tribute to her son. She has photos, a stuffed teddy bear and a Raggedy Andy doll of Jeremy’s. She had three children after that winter, and has brought them to Jeremy’s grave to pay respects to their older brother.

“I’ve tried really hard to keep Jeremy alive for my children so they would know him,“ Hathaway said. “That was really important to me that they knew him and could love him.  The other day, my third child Jillian, she said, ‘I never thought Jeremy was dead all these years. You made it seem like he was in France or something,’ so I’ve done my job. They know him.”

Though she’s just about lost hope at times, Hathaway stays strong for her husband, kids and seven grandkids.

Hathaway wrote a book about life after losing Jeremy. She said it’s been therapeutic for her and other families grieving a loss.

She also contributes to the Kansas Missing and Unsolved page on Facebook, aimed at finding missing people in the state.

“A mother’s love is pretty strong and we’ll cling onto anything, anything,” she said. “So that’s the part of me that wants him to be alive, and if you think about that, he’s a man now and just doesn’t know how to find us. Somebody could have taken him and told him whatever story. I like to think of that instead of him being in the Missouri River. It’s a hard one, a real hard one.”

A boy disappeared while at his babysitter’s decades ago in northeast Kansas.

Jeremy Coots went missing on Feb. 18, 1977, at his babysitter’s house in south Atchison. The four-year-old was playing outside with the babysitter’s son; her boy came running back, saying Jeremy had gone over a hill and into the river bluffs behind the house, according to reports. He is hearing impaired.

He’s never been seen or heard from again. If alive, Jeremy would be 45 years old.

Distinguishing marks: scar on left side of jaw; scar on forehead; scar on chin; he is hearing impaired.

If you have information that could help find Jeremy Coots, contact the Kansas Bureau of Investigation at (785) 296-8200.