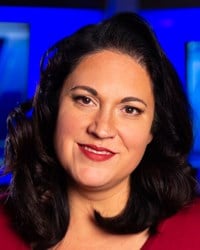 Pilar Pedraza sees journalism as a public service, providing viewers with the information they need to lead their best lives. This is part of what led her into political reporting early on.  She cut her political reporting teeth on the First in the Nation Caucuses in Iowa in the 90s. She won multiple awards for her election coverage in Des Moines. She's spent much of the last decade covering the latest developments in Kansas politics.

In between elections she's covered everything from the Oklahoma City Bombing, the OJ Simpson Civil Trial, and the birth of the McCaughey Septuplets to the Capture of BTK and the Flight Safety Crash at Eisenhower Airport.

With two decades of experience in broadcast news, Pilar has done just about every job there is in TV news.  Her favorite, to date, is reporting and anchoring, especially covering politics and breaking news. She grew up in newspaper newsrooms in Michigan and Oklahoma, where her mother was a reporter, editor, and columnist and where she learned how to work with her local community.

Pilar graduated from Iowa State University with a BA in Journalism and Spanish in 1996 and got her MA in History with an emphasis in 20th century politics at Pittsburg State University in 2019.  She is fluent in multiple languages.

In her scant free time, Pilar likes to hang out with her husband of 20+ years and their son, a recent graduate of Maize High School. She enjoys reading, quilting, cross stitching and petting her dog and two cats.