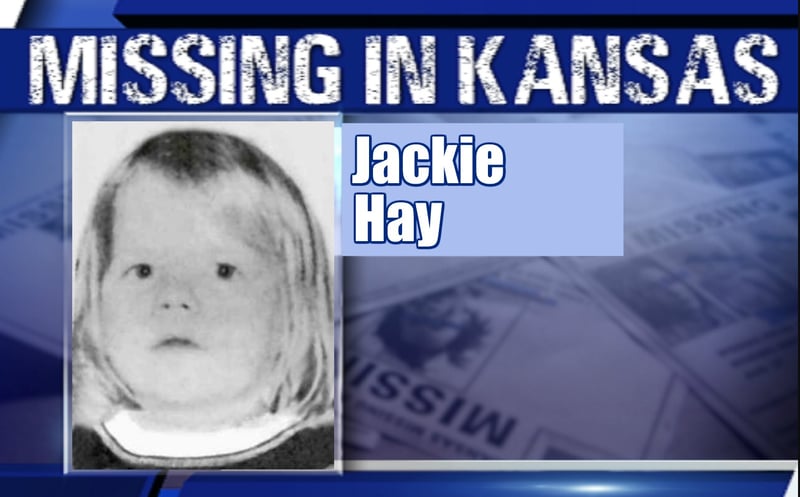 It’s been 37 years since Jackie Hay was last seen.

She was playing with kids on the afternoon of Sept. 12, 1981, near her home at Colfax and Golf Park. When an older brother went to bring Jackie back inside, he could not find her. Jackie, 5, had vanished.

Her father, Olen Hay, said Jackie was a bright girl who started kindergarten the week before.

“She sounded like an adult on the phone. Oh, she was just like grown up and outgoing. Just an awesome kid,” he said.

Even to this day, Olen remembers it all vividly. Their family called police for help, but it took hours before the department started an official search, Olen said.

Investigators believe Jackie was likely abducted, and Olen’s fear is that with so much time that passed, his daughter could be anywhere.

In 1981, hundreds of people helped look for the girl, including officers, firefighters, the Kansas National Guard, horseback riders and neighbors. They looked in a heavily wooded area near the family’s residence, abandoned homes and other possibilities.

“They went everywhere,” Olen said. “Little creeks and timber. Yes. there's a wooded area over there. I mean if there was something there, I'm sure they would have found it.”

The week she went missing, Topeka Police Det. Tom Lemon tells the Topeka Capital-Journal they had dozens of tips and calls,

“It’s getting frustrating,” he said in the September 1981 news report. ”We’re getting a lot of calls, but we don’t have any leads. It’s kind of like looking for a needle in a haystack.”

Olen said he was touched by how everyone responded to helping the family, including her mom, dad and four siblings.

“Oh. Everybody brought food and…” Olen said, as he started to get choked up during our recent interview with him.

Nothing turned up. The searches were called off about two weeks after Jackie disappeared.

There were many eyewitness accounts on what happened that day. In addition to interviewing kids who were playing with Jackie, one tip came from a water department employee. The worker was responding to a service call in the area. He spoke to a man who flagged him down to ask a question. According to Capital Area Crime Stoppers, the worker said he had seen the man with a little girl matching the description of Jackie.

Other witnesses saw a gray van down the street, which may have been involved in the abduction.

That day, police brought in a potential suspect for questioning about the case. He reportedly was questioned for a few hours and was released. The man lived in the neighborhood, according to an article in the Capital-Journal.

Ret. Maj. Jerry Young was one of the first officers on scene. He went through the neighborhood to talk to people about the missing girl.

A few years after the abduction, he said the Topeka Police Department got a tip about her body being in a field in an area surrounding Topeka. Police brought out search dogs to look for Jackie’s remains, but they could not find anything, he said during an episode of Capitol Cold Cases – a program with KTWU and Capital Area Crime Stoppers.

Back in 2011, a tipster called Crime Stoppers about the cold case abduction. Crime Stoppers tried to get in touch with the tipster again, hoping to figure out what happened to the girl.

As time moves on, there’s a lack of hope for the family.

Jackie's mom, Judith, passed away in February 2007. At her grave site, she shares a headstone with Jackie.

If alive, Jackie would be 43 years old, having celebrated her birthday on Feb. 17.

Olen, now in his mid-70’s, believes his daughter was killed. He hopes new information will come forward, so his family can have closure.

“Is there something that you would like to say to that person? If someone knows that information, or even a person who took her?,” KAKE News Anchor Annette Lawless asked Olen.

“I believe in karma,” he responded. “Karma will take care of it.”

Jackie Hay hasn’t been seen since Sept. 12, 1981. The five-year-old vanished as her family was preparing for an outing in Shawnee County. It’s believed that she was abducted from the front yard of her home in southeast Topeka.

Back in 2011, a tipster called Topeka Crime Stoppers about the cold case abduction. Crime Stoppers tried to get in touch with the tipster again, hoping to figure out what happened to Hay.

Other distinguishing marks: Freckles across the bridge of her hose; one small freckle between her right thigh and pelvis.