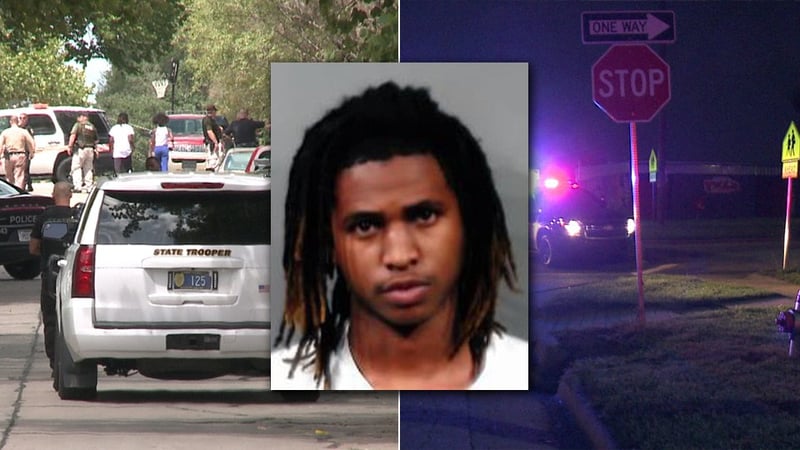 Two gang-related shootings that injured a 7-month-old baby and a 2-year-old girl this week are connected, Wichita police say.

Police announced Friday morning that at 18-year-old man, identified as Kerry Grant, was arrested for two counts each of aggravated battery and aggravated assault in connection to the latest shooting. Officer Charley Davidson said the 2-year-old victim was shot in the foot by a suspect driving a white Chevy Impala in the 3800 block of East Ross Parkway on Wednesday.

A police report lists Grant as a victim in Tuesday's shooting near 24th Street North and Chautauqua. Grant and a 7-month-old child a man and a seven-month-old baby were hurt by shrapnel after someone started shooting.

The latest shooting happened Wednesday around 8:30 p.m. outside the apartments at Roosevelt and Ross Parkway in Planeview.

"My neighbors said that there was a drive by," said Celena Cook, neighbor. "I just heard one of the ladies above me. She was like, 'The little baby got shot in the foot.'"

Cook said her children often play outside in the playground between the apartment buildings.

"Crazy, I mean anything could happen. Like it could've been anybody really," said Cook.

Wichita Police said a two-year-old girl was struck in the foot with non-life threatening injuries while at the neighborhood playground. Three other children, ranging in ages from eight to 16, were also in the playground at the time of the shooting.

"The parents of the girl are refusing to cooperate with investigators, which has significantly hindered the ability to identify a suspect," said Officer Paul Cruz, in a news release. "WPD Chief Gordon Ramsay expressed outrage at the incident and the lack of cooperation from the parents. The shooting is related to an ongoing feud between two street gangs."

“This is very concerning to us,” Ramsay said, in the news release. “We have added additional resources to respond to these violent crimes. We need the help of witnesses and the community. Police are only part of the solution. Our Officers will continue to work with community leaders with the See Something, Say Something initiative.”

The suspect in that shooting is an unknown person, inside a white Impala, who fired several rounds into the playground while the vehicle was driving in the wrong lane on Ross Park Way.

Another child was also hurt earlier this week during a shooting in northeast Wichita.

On Tuesday afternoon, a man and a seven-month-old baby were hurt by shrapnel after someone started shooting near 24th Street and North Chautauqua.

"We've got to stop it. It's dangerous. I got grandkids. Every time I hear a shot, I think about them. It's just sad," said Val G Williams, owner of Tree Man Services.

Police said both shootings remain active investigations. No arrests have been made in either case.

If anyone has additional information on these cases, call police or Crime Stoppers at (316) 267-2111.