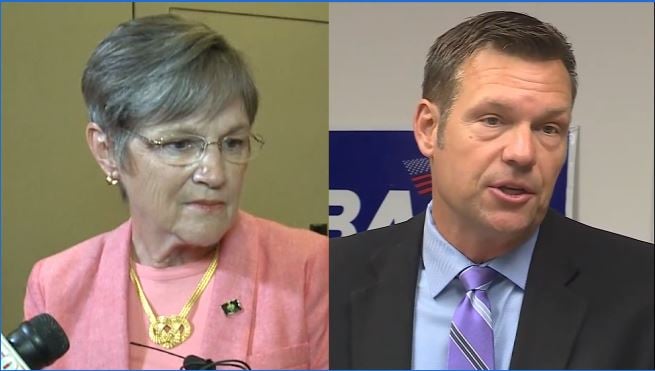 Kris Kobach addressed reporters at the front steps outside of the Capitol building in Topeka Wednesday afternoon. He’s hoping to have the governor’s office inside next year, and he did get one stop closer after the concession of the primary election from Gov. Jeff Colyer.

IT’s an intense campaign – obvious by statements he made during the press conference.

His opponent, Democrat Laura Kelly was a big harsher, calling him “Sam Brownback on Steroids.”

Given what’s at stake – the rhetoric will likely get more heated in the next 2 months.

“Kobach’s going to have a lot of work to do to get back moderate Republicans,” said Dr. Neil Allen, WSU Professor of Political Science. “The democrats are not giving up and they have a path to victory with Kobach as the nominee.”

The extra week of drama from the leftover results of the state’s primary election put republicans at a disadvantage, according to Allen.

“The democrats are way more united than republicans are. Laura Kelly had a pretty massive victory in the primary,” he said. “The republicans are different. They have a pretty strong split between moderates and conservatives and also how much resources to put behind Kobach’s agenda.”

The Cook Political Report has been analyzing the race for weeks. The organization moved the race category from “likely republican” to “toss up” in the November election.