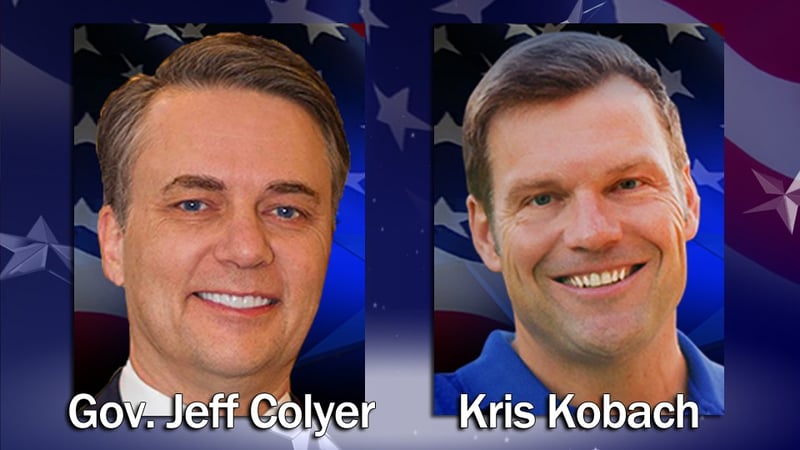 Unofficial results show Kris Kobach upset Jeff Colyer in the GOP primary for Kansas governor, but the race is too close to call.

With election officials in Kansas halting the vote count Wednesday morning, Secretary of State Kris Kobach leads Gov. Jeff Colyer by 191 votes. It could be a few days before all absentee votes are counted.

A new state law allows ballots postmarked as of Tuesday to be counted, so long as they arrive three days after Election Day.

Kansas Gov. Jeff Colyer and Kobach were virtually tied atop a seven-candidate field with nearly two-thirds of the precincts counted. Kobach, the Kansas secretary of state, built a national reputation as a conservative agitator for both tough immigration policies and strict voter identification laws.

Final results were slowed by tabulation problems in Johnson County.

"Given the historically close margin of the current tabulation, the presence of thousands of as yet uncounted provisional ballots and the extraordinary problems with the count, particularly in Johnson County, this election remains too close to call," Colyer said in a statement Wednesday morning. "In the 2014 primary, 6333 provisional ballots were cast. The current margin is 0.06%. This is the equivalent of a 2 vote margin in a 5000 vote race with hundreds of votes left to count."

Kobach received a late endorsement from President Donald Trump. Colyer received the endorsement of the National Rifle Association and had the backing of Kansas political legend Bob Dole.

Kobach, the Kansas secretary of state, built a national reputation as a conservative agitator for both tough immigration policies and strict voter identification laws. He was an early supporter of Trump in the presidential race, advised him during the campaign and in the White House, and served as vice chairman of a now-disbanded presidential commission on election fraud.

But Colyer -- who only became governor in January, succeeding Sam Brownback -- raised more in campaign contributions than Kobach, received the endorsement of the National Rifle Association, and had the backing of Kansas political legend, former U.S. Senator Bob Dole.

Kobach: Governor should unify GOP if he loses

Kobach and Colyer were virtually tied atop a seven-candidate field early Wednesday with most of the outstanding results from Johnson County in the Kansas City suburbs, which has nearly 23 percent of the state's voters.

Kansas has no automatic recount procedure and if a recount is requested it must be paid for by the candidate requesting it.

Some Republicans worried that if Kobach won, his aggressive personality would make it harder to appeal to a broader electorate and give Democrats an opening in a red state that has been willing to elect Democrats as governor in the past. Democrats nominated veteran state Sen. Laura Kelly, of Topeka, to settle their first contested primary for governor since 1998.

Trump intervened in the race less than 24 hours before polls opened, endorsing Kobach in a tweet. Kobach told reporters that the endorsement "came just in time" and that he expected it to help him, as it has helped other candidates in other races. Trump's tweet backing Georgia Republican governor hopeful Brian Kemp vaulted him to an easy primary runoff win two weeks ago. Trump also on Tuesday boasted that his rally over the weekend for the Republican in an Ohio House district had helped, even though that race was too-close-to-call.

Richard Cronister, a 73-year-old retired construction company owner from Topeka, said that Trump's endorsement was important to him as he voted for Kobach. He said he thinks Trump's tax cuts have helped the economy and likes Trump's stance against illegal immigration. As for Kobach, Cronister said, "He is doing his best to stop immigration and the illegal voting. The ACLU and all those organizations are against him."

But Bruce Underwood, a 59-year-old engineer, said he voted for Colyer because he believes Kobach is "detrimental" to Kansas. He said he would likely vote for a Democrat in the general election because Republicans aren't standing up to Trump.

"Trump is supporting Kobach and I just can't stand Trump, he is not good for our country," Underwood said.

Like the president, Kobach promises a no-apologies style, telling voters repeatedly: "I don't back down. I double down." His use of a Jeep with a replica gun mounted on top during campaign stops at local parades this summer prompted backlash. Kobach called his critics "snowflakes" and continued to use the Jeep.

Kobach's penchant for provoking outrage could serve him well in a crowded seven-candidate Republican primary Tuesday. Kansas does not hold runoff elections so the winner in the primary will move on to November.

Kelly, a 14-year veteran of the Legislature, defeated former Wichita Mayor Carl Brewer, who had sought to be the first-ever black nominee, and ex-Kansas Agriculture Secretary Joshua Svaty, who had stressed his youth and potential rural appeal.

The mild-mannered Colyer is seeking a full four-year term after moving up from lieutenant governor in January when the unpopular Brownback took an ambassador position in Trump's administration. Colyer's defeat would mark the first primary loss by a sitting Kansas governor since 1956 and the first nationally since Hawaii's Neil Abercrombie lost a primary in 2014.

Besides Colyer and Kobach, the other major GOP candidates, Insurance Commissioner Ken Selzer and former state Sen. Jim Barnett, were far behind.

While the marquee race in Kansas this year is for governor, voters also were picking candidates to contest two House seats that Democrats are hoping to flip in November.

Kansas Primary Election Results
Check out these photos from across KAKEland snapped by our viewers, staff and local officials. Do you have pictures to share with us? Email them to news@kake.com.