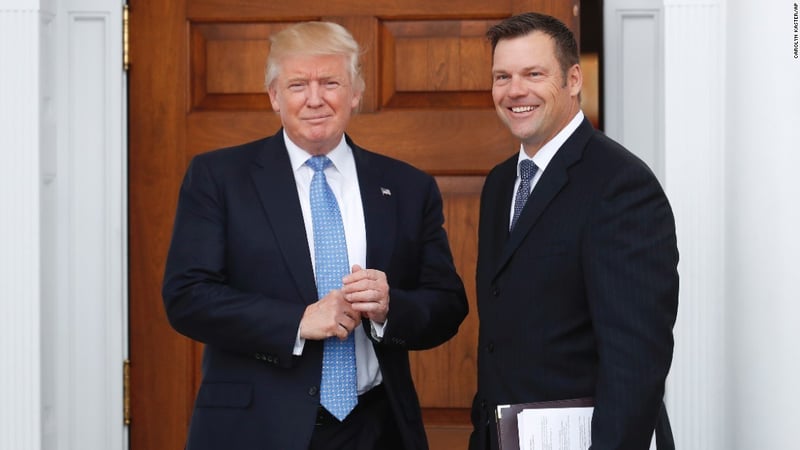 Kansas Gov. Jeff Colyer spent months bolstering his credentials in the Republican primary for governor but it may not be enough after President Donald Trump tweeted his backing for Kris Kobach, a conservative agitator for strict immigration and voter ID laws.

Colyer raised more money than Kobach, received the endorsement of the National Rifle Association, brandished his anti-abortion credentials and had the backing of Kansas political legend Bob Dole.

Then, less than 24 hours before polls opened, Trump endorsed the Kansas secretary of state. It was not a huge surprise because Kobach was an early supporter of Trump in the presidential race, advised him during the campaign and in the White House, and served as vice chairman of a now-disbanded presidential commission on election fraud.

Kris Kobach, a strong and early supporter of mine, is running for Governor of the Great State of Kansas. He is a fantastic guy who loves his State and our Country - he will be a GREAT Governor and has my full & total Endorsement! Strong on Crime, Border & Military. VOTE TUESDAY!

What to know before you head to the polls

But the tweet could tip the scales in a competitive race, as some other recent Trump endorsements have done. Trump's tweet backing Georgia Republican governor hopeful Brian Kemp vaulted him to an easy primary runoff win two weeks ago. Trump also has recently given a boost to GOP primary candidates in Florida, South Carolina and Alabama despite an overall approval rating that is underwater.

Like the president, Kobach promises a no-apologies style, telling voters repeatedly: "I don't back down. I double down." His use of a Jeep with a replica gun mounted on top during campaign stops at local parades this summer prompted backlash. Kobach called his critics "snowflakes" and continued to use the Jeep.

Kobach's penchant for provoking outrage could serve him well in a crowded seven-candidate Republican primary Tuesday. Kansas does not hold runoff elections, and Kobach's conservative base could allow him to win the primary with a third or less of the vote.

Some Democrats hope that is exactly what will happen, betting Kobach is such a lightning rod that a Democrat could snatch a red state victory in November.

Democrats have their first contested primary for governor since 1998. They must choose from the experience of 14-year state Sen. Laura Kelly, the youth and potential rural appeal of former Kansas Agriculture Secretary Joshua Svaty, and possibly their first-ever black nominee in ex-Wichita Mayor Carl Brewer.

The mild-mannered Colyer is seeking a full four-year term after moving up from lieutenant governor in January when unpopular Gov. Sam Brownback took an ambassador position in Trump's administration. His defeat would mark the first primary loss by a sitting Kansas governor since 1956 and the first nationally since Hawaii's Neil Abercrombie lost a primary in 2014.

Kobach got a strange boost in July when the American Civil Liberties Union unleashed a $200,000 voter education campaign against his positions on immigration, voting rights and other issues. He relished the attacks and said if elected governor he would be the group's "worst nightmare."

In the Democratic race, the 38-year-old Svaty pitched himself as the candidate of the future in his race against the 68-year-old Kelly and the 61-year-old Brewer. He also stressed his ties to his rural hometown of Ellsworth.

But as a legislator before becoming agriculture secretary, Svaty had an anti-abortion voting record and refused to put a label on his views even after expressing support, during a recent forum, for women making their own health care decisions.

Besides Colyer and Kobach, the other major GOP candidates are Insurance Commissioner Ken Selzer and former state Sen. Jim Barnett, a Topeka physician.

Polls in all 105 counties open by 7 a.m. and stay open until 7 p.m. local time, with four western Kansas counties an hour behind in Mountain time.