An Ohio man received a citation for criminal damaging after he smashed a car window to rescue two dogs.

Richard Hill thought he was being a good Samaritan on July 28, when he broke car window to rescue two dogs, which he claimed appeared to be in hot car without the owner over the weekend. Instead, he was handed a citation for criminal damage, he told ABC News in a phone interview.

Hill saw a small dog that appeared to be two or three months old and a larger dog that was about 2 years old inside the locked car. A passerby who also saw what was going on went into the Walmart nearby to find the owner of the car, and another man called Parma police to inform them of the situation, Hill reported.

After the others went to get help, Hill took a hammer from his truck and smashed the window to let the two dogs out, he said.

Police soon arrived on scene as a witness helped give the dogs some water, Hill said.

"I explained the whole thing to him [the officer] as far as what was going on, and I felt that the dog needed to be out right then and there. [The office] told me that I did not have that rights and I had to wait on him," he recalled. "I thought that I covered all of my basis based on the law stating that as long as I call 911; as long as I attempt to locate the owner of the vehicle and make sure that that is the only way of getting into the vehicle." 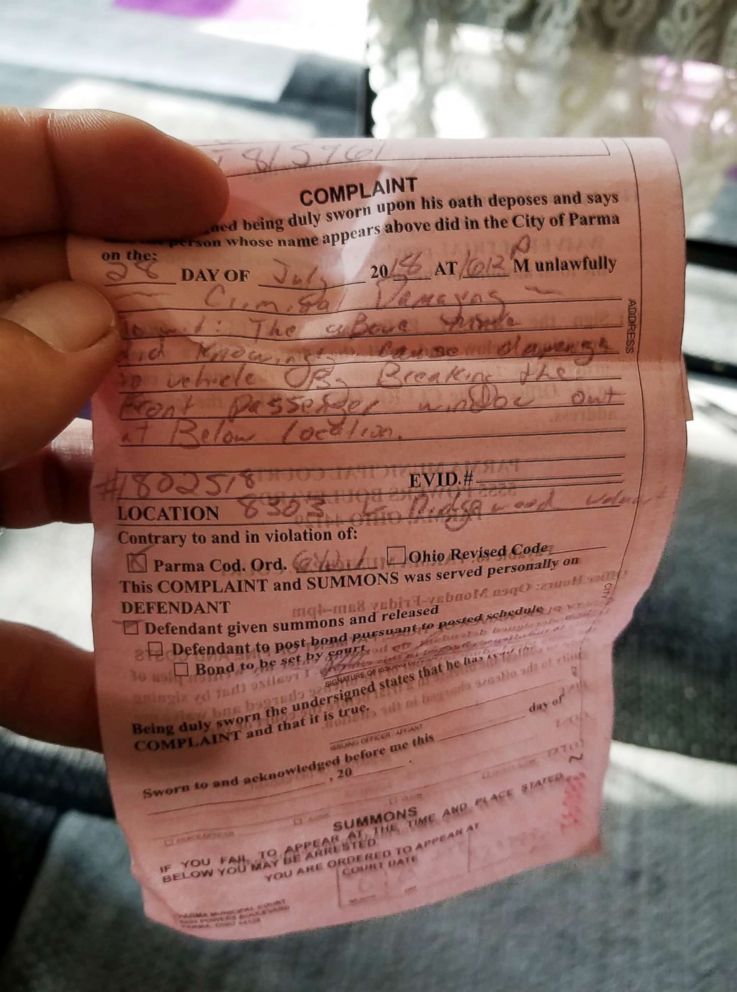 The most upsetting part to Hill is that the owner of the vehicle did not received a ticket, he claimed.

"I’ve got the ticket right then and there," he said, adding the citation was handed to him before he left the scene.

Though he’s worried about cost to hire attorney and the fine that he might have to pay, Hill said he would still help the dogs having known what he would face.

"I would have done everything the same," he said. "The only difference thing I know I would end up doing is, I would actually take picture or video to fully cover all my basis, if something like this was to arrive I have all the evidence myself because now they are stating that the sun roof was wide open."

"I just wanted to help the dogs. That’s it," Hill said.

The Parma Police Department told ABC News that they have evidence that shows that justification of the citation.

"He broke the window knowing the police were coming and it’s only been six minutes," Parma police Sergeant Daniel Ciryak told ABC news over phone interview. "He was not physically arrested. He’s only cited and given a court case."

"He can explain to the judge as why he took the action he did," Ciryak said.

Cleveland.com reports Ohio's "Hot Car" legislation protects Good Samaritans who find a child or pet in a hot vehicle. The law allows people to intervene by forcibly entering the vehicle prior to emergency personnel responding without the fear of litigation. The law says nothing about a Samaritan waiting until police arrive.