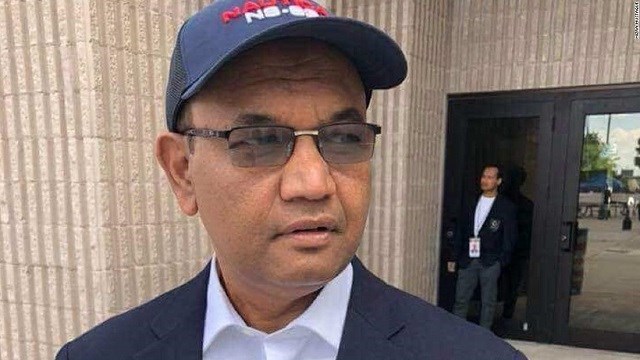 A shooting in February scarred Elama Ali. Another this month took her father's life.

When an armed teen burst into Marjory Stoneman Douglas High, moving through the school and mowing down students and teachers, Elama took cover.

Seventeen people were killed, but she -- and her brother -- survived the Valentine's Day massacre in Parkland, Florida.

Like many survivors, she resolved to do something about it.

This week, the violence that turned Elama and her friends into activists for gun reform visited again. And this time, it claimed her father.

Ayub Ali was shot and killed Tuesday in a robbery at his convenience store.

"The reason we moved to Parkland was because he liked the school," Elama told CNN on Friday. "I didn't want to move here. But he told us, 'We are only moving because the school is amazing.'"

Ayub Ali was 61 when he died. He came to the United States from Bangladesh in the late 1990s, and moved to Parkland just last year -- the same year it was named Florida's safest city.

The shooting at Marjory Douglas shook him -- like it did so many parents. He worried about his kids' future, but there wasn't much he could do about it.

He was the family's sole bread-winner, a dad to a daughter and three sons -- the youngest of whom is 22 months.

"My dad would take care of everything in the house, all the bills," Elama said.

Busy at work, he instead encouraged his daughter's activism.

With his blessing, the 16-year-old traveled to Washington, DC, for the "March for Our Lives" rally earlier this year.

"He took me where I wanted to go," Elama said. "When i was in Washington, he asked about it. He watched it on TV."

Ali was the owner of Aunt Molly's Food Store, tucked in between several other shops in North Lauderdale -- about 10 miles from his house.

Tuesday afternoon, a man entered the store, held Ali at gunpoint, took money from the cash register and left. But shortly afterward, deputies say, the gunman returned and fatally shot him.

"If you came for the money, take the money and go," she said. "Why did you have to kill my husband?"

As the family prepared for Ali's funeral Friday, they kept going back to the same question: Why.

"We're trying to be strong, but it's overwhelming," Elama said.

Officials have released surveillance footage from the crime but they haven't made any arrests -- leaving the Ali family to once again contend with a senseless act.