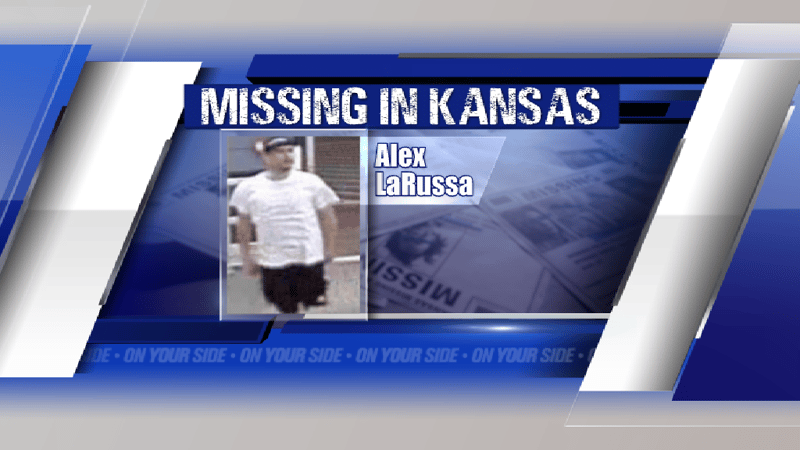 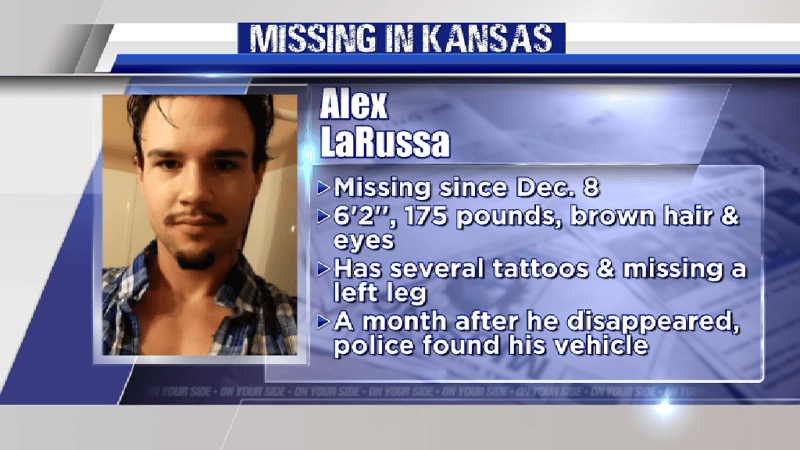 The disappearance of Alex LaRussa has puzzled investigators in Saline County.

His mom, Kelli Couch, said she was glad to see him more often. He had moved from Great Bend to Salina after an incident that led to his leg being amputated. It was a devastating change.

“He was a lot of pain to physical pain from that,” Kelli said. “And that's again, why he moved back to this area. I got involved in his life again, and started to build a relationship with him again.”

Kelli briefly saw Alex on Dec. 8, 2017 – the day he vanished. She said it’s unusual for months to have gone by with no contact with her son. When Alex wasn’t there for Christmas, she believed something terrible happened.

“It's really it's really not good to not have any answers,” she said. “You know, don't know anything. Yeah, absolutely nothing except for rumors.”

Alex had gone through a tough year. Here’s a timeline of events we’ve been able to confirm with Salina Police.

July 4, 2017: On July 4, he ended up hurting his leg and needed it amputated. Not long after, he moved from Great Bend to Salina.

Jan. 14, 2018: The vehicle Alex was driving was found on a farm in New Cambria, Kan., in northeast Saline County. Salina Police Det. Andrew Ziegler confirms a cell phone, clothing and wheelchair were found in the vehicle, among other items.

Since then, Ziegler said the department has conducted ground searches to find Alex, yet they have not been able to find him. Alex’s family fears foul play.

“It was like he was just ripped out of my life,” Kelli said. “It's been like an awake nightmare. You know, it's a…it's a living nightmare almost every day.”

She and her mom, Colleen Greenemeyer, like to think positively. They say that while Alex may have had a troubled past, he’s a good guy at heart. He’s dearly missed by them and his two brothers, who are hoping to get answers.

“He was kind of funny, you know friendly,” Kelli said.
“And lovable,” his grandma Colleen echoed.

Some of the hardest times for Kelli are when she’s driving around town and sees someone who resembles Alex. Other times, she’ll see a pile of brush or something where Alex could be hidden. It makes some days unbearable for her and Colleen.

"That's all you think about all day, every day, all day,” Colleen said. “It never goes way never goes out of your head. No matter what you're doing. Even when you're with other people. It's just always right there, and it's very painful.”

Police and the family believe someone knows exactly what happened to Alex. They’re hoping that person will come forward so they can find the now 26-year-old.

“I don't even care if it's an anonymous letter,” Kelli said. “We just want to know where he is, or his remains are, so we can have a funeral or some type of service to have some closure.”

Investigators continue to piece together clues behind what happened to a man last in December 2017 in Saline County.

Alex Michael LaRussa has been missing since Dec. 8, 2017. He was last seen on during the late evening hours that day near Ohio and Iron in Salina. LaRussa was driving a gold 2004 Ford Explorer with a Kansas license plate, said Salina Det. Andrew Ziegler.

On January 14, 2018, LaRussa’s vehicle was located in rural northeast Saline County. Nobody was in the vehicle.

Other identifying marks: Numerous tattoos and is missing his left leg

If you have information that could help in the case, you’re asked to call Salina/Saline County Crime Stoppers at (785) 825-TIPS or Det. Andrew Ziegler at the Salina Police Department at (785) 826-7210.