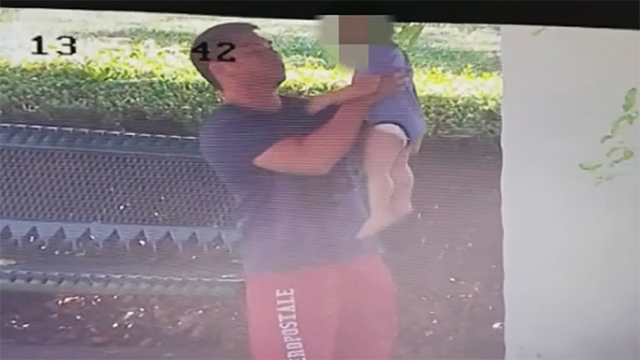 Police arrested a California man after he allegedly used his 1-year-old son like a weapon to hit his girlfriend during an argument.

Techhoak Danny Lim, 27, was freed on a $50,000 bond the day after he was arrested on suspicion of child endangerment with great bodily injury.

Surveillance video from Lim’s Riverside, CA, neighbors captured a violent argument the man had last Thursday with his girlfriend, who was trying to hide from him, according to police.

During the argument, Lim appears to use his 1-year-old son as a weapon, swinging and hurling the child at his girlfriend.

Police described Lim’s actions as using the boy "almost like a baseball bat."

The man can also be seen dropping the child, who then chases after him.

"It takes your breath away, and then, there's anger," Detective Jerilynn Czobakowski said.

One police officer saw the footage on Facebook, where it was posted by Lim’s neighbors, the Ogdens. He was so upset that he went to the neighborhood on his own to track down the suspect, according to Czobakowski.

Police say after they found him, Lim admitted to part of the act. He took the officer to his home, so he could check on the boy.

"He did admit and said he would probably be going to jail for what he did," Czobakowski said.

The 1-year-old was taken to the hospital but found to only have cuts and bruises.

Police and many others are praising the Ogden family for turning over the video because they believe they stopped it from happening again.

The little boy is now in the custody of his mother.