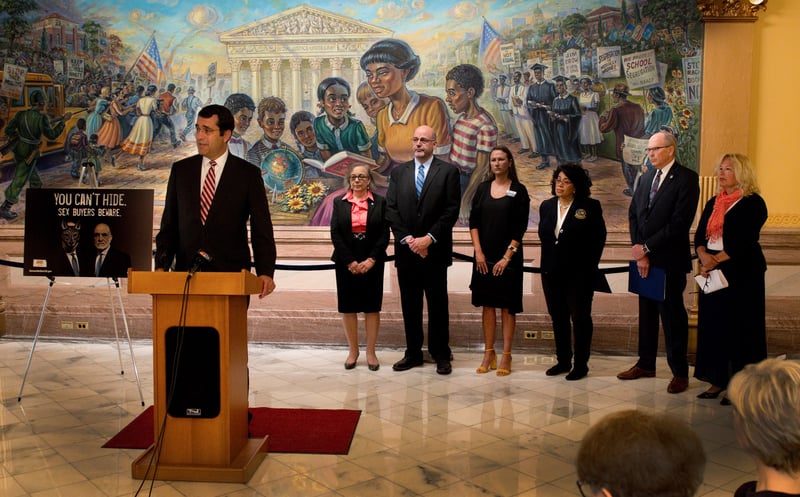 According to the Street Grace organization, the underground sex economy is now the second largest black market in the US. It just surpassed the illegal gun trade, and is only behind the drug market.

It's a problem in Kansas and state Attorney General Derek Schmidt is working to change how we put a stop to sex trafficking.

A startling PSA will soon air on televisions statewide showing everyday men walking around with masks, hiding their identity. It's a warning to let johns know they are being unmasked. .

Schmidt announced Monday that Kansas is joining ten other states in an initiative called Demand an End.

For a long time, the system has been focused on rescuing or arresting survivors of human trafficking, and not the people who buy sex..

"We talk a lot about how many juvenile, minors who have been sold for sex or labor oftentimes get charged for human trafficking or prostitution, while those who are adults who purchase them get to go to dinner with their family in the evenings. They go to church on Sundays and they get to work their jobs," Dr. Karen Countryman-Roswurm said.

Countryman-Roswurm has been fighting for the system to change, and the AG's announcement gives her hope. She's the founder and director of the Center for Combating Human Trafficking at Wichita State University. She's been working locally to make sure human trafficking survivors aren't always treated like criminals. Her organization says it's a very real problem here.

"It absolutely is an issue and we know that adults and youth are trafficked in Sedgwick County every day," the Center's assistant director Allison Farres said.

Countryman-Roswurm says this is a good start...

The Attorney General is encouraging people to sign a petition that'll be presented to Kansas lawmakers. It'll show that there's support for efforts to end sex trafficking in Kansas. If you're interested in signing and for more information visit: https://ag.ks.gov/public-safety/human-trafficking/demand-an-end