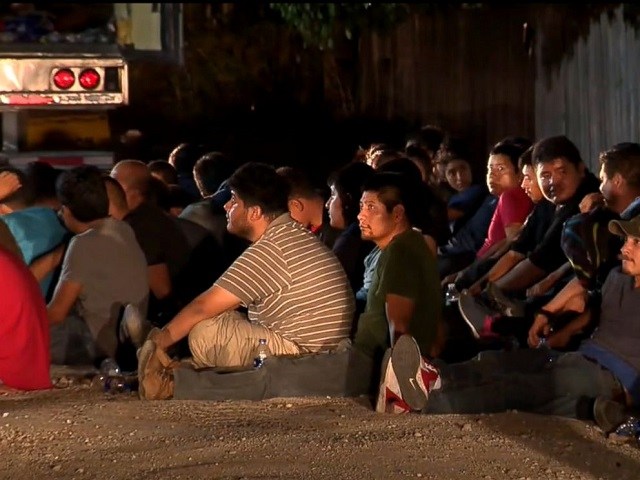 A U.S. citizen is facing human smuggling charges after dozens of suspected undocumented immigrants were found traveling inside his tractor-trailer in Texas on Tuesday night, according to federal authorities.

U.S. Immigration and Customs Enforcement said it received a call from a law enforcement agency on Tuesday around 8:30 p.m. local time regarding a possible human smuggling venture in San Antonio, near Interstate 410. Special agents responded to the location and discovered a tractor-trailer containing 54 people suspected of entering the country illegally, including men, women and minors from Brazil, El Salvador, Guatemala and Mexico.

Medical assistance was provided on the scene to all individuals and five people were transported to local hospitals for further treatment, according to ICE.

As of Wednesday, four people had been released and one remained hospitalized.

"The people rescued from this tractor-trailer were very lucky to have been discovered before the Texas heat took its toll," Shane Folden, special agent in charge of ICE's Homeland Security Investigations in San Antonio, said in a statement. "We have recently seen how smuggled people have died under the dangerous circumstances human smugglers transport their human cargo. These horrific instances show how no one should trust their lives -- or the lives of their loved ones -- to these criminal organizations."

San Antonio Fire Chief Charles Hood told ABC affiliate KSAT that the individuals were traveling in an air-conditioned tractor trailer with drinking water and that no one suffered any heat-related illnesses.

ICE said its special agents detained the suspected undocumented immigrants and arrested the driver of the tractor-trailer -- an American who is expected to be federally charged with human smuggling. The investigation is ongoing.

The United States Attorney's Office for the Western District of Texas has accepted criminal prosecution of the driver, according to ICE.