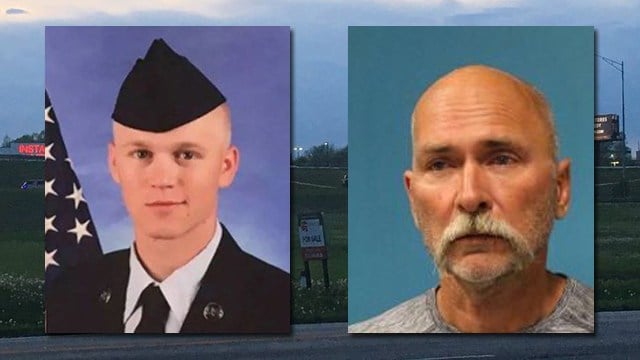 A 58-year-old man has been charged with second-degree murder in connection to the death of a 24-year-old Air Force veteran and Missouri Air National Guard reservist who was stabbed in an apparent road-rage incident.

Court records show Webb was convicted of murder in 1981 and also had multiple convictions for assault. The Lee's Summit Police Department said he was taken into custody on Wednesday night.

"Cody served in the Middle East, and proudly shipped off to Houston and Puerto Rico to help his fellow Americans recover from natural disasters," Greitens wrote. "He served Missouri and his country well. Please say a prayer for justice, and for peace for his family and friends."

The search continues for the killer of a 24-year-old Air Force veteran and Missouri Air National Guard reservist who was stabbed in an apparent road-rage incident.

Details are emerging as detectives work around the clock to solve the death of Cody Harter, Sgt. Chris Depue, a spokesman for Lee's Summit Police Department, told ABC News.

So far, he said, several witnesses saw the two men "arguing" outside of Harter's truck and the suspect's vehicle -- both were pulled over and jutting out of a median between Interstate 470 and MO-291, Depue said.

The suspect was driving a "mid-sized car" and not a truck or SUV, he noted.

Harter was driving his maroon Chevy Silverado C71 extended-cab, with a newly purchased lawnmower in back, around 7:30 p.m. Saturday when he apparently pulled over and stepped outside to argue with another driver.

"Both cars were stopped near the middle of the road," Depue said, noting multiple witnesses would have had to navigate around them to avoid seeing the men square off.

"The witnesses have told us that it looked like they were arguing," he added. "You could tell by their body language there was an altercation."

Moments later, a wounded Harter was then seen staggering into traffic, eventually finding the arms of a Good Samaritan who held him and prayed with him until his dying breath, Cody's mother, Kerrie Harter, said.

"At this point, police are looking at road rage as the probable cause," Depue said. "There's nothing to indicate a robbery occurred."

Based on the investigation so far, it doesn't appear the vehicles collided, as Harter's truck didn't appear to have any "damage to its bumper," Depue said. Authorities believe the altercation began after both exited their respective vehicles. No weapon was found at the scene.

In a moving plea for the public to come forward, Harter's family -- his mother, Kerrie; father, Mike; sister, Kylee; girlfriend, Shelby -- and a fellow airman, Armando Trevino, all appeared on TV to beg witnesses to help authorities solve the case.

Kerrie Harter described her son as a dutiful soldier who "would help anybody" and was about to graduate with an engineering degree from Missouri Western State University.

"He had been to war and back, and to die because someone was angry?" she said. "My son drove 65 miles per hour because he was so frugal with his gas mileage. I can only imagine someone was upset because he wasn't going fast enough. But that's not a reason to take his life and leave him there."

Harter's sister Kylee said during Sunday's press conference that the man who did this to her brother isn't human.

"I think you're a monster," she said. "You not only took my brother's life but you took everything away from us."

"Many have been coming in and they are investigating them," he said. "We're hoping for more because we're going to build this case like a puzzle and solve it one piece at a time."

In a statement, The Missouri National Guard said it was "sad to learn of the death of Senior Airman Cody Michael Harter ... our thoughts and prayers are with [his] family and loved ones."

Harter enlisted in the National Guard in 2012 and completed an overseas deployment to Qatar as part of Operation Enduring Freedom, the statement confirmed. Harter, he family said, recently was part of the military response to hurricanes that ravaged both Houston and Puerto Rico.

Depue said that detectives have been racing to get a hold of surveillance video and other potential clues.

"We’re in pursuit of justice and we will not stop -- whether it be one day, one month or one year until we get what we want," he said.