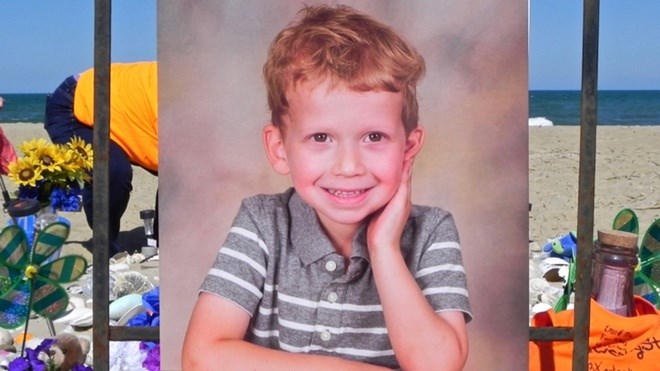 Authorities say they have found the body of a 4-year-old boy who was swept out to sea while walking with his mom on a North Carolina beach.

Kitty Hawk Police Chief Joel Johnson said on social media that the body of Wesley Belisle was found early Monday more than 30 miles from where he disappeared on Wednesday.

At 7:40 am the body of Wesley Belisle was located by the Currituck County Sheriff's Office on Carova Beach in Currituck County. Wesley's family has been notified and are... https://t.co/U6VuYnjC5M

Johnson said Wesley was "under the watchful eye of the attending parents while walking along the shore" when he was swept away from his mother and into the ocean. The current carried him away.

"As parents, this is our worst nightmare, even for those of us who love and have grown up by the ocean," Johnson said. "Please join us in thought and prayer for this family as we mourn with them the loss and give thanks for the well-being of our own children."

The boy's family was vacationing from New Hampshire. Police say Wesley's family has been notified and are in the process of making arrangements for his body to be transported back to New Hampshire.