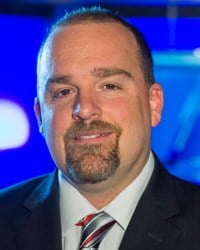 Before coming to KAKE, he was the weekend Meteorologist and “Weather Warrior” for WSIL News 3, in Southern Illinois for five years.  Before that, he started out at KMGH in Denver, Colorado as a weather producer and storm chaser.

In addition to his in-studio work, Tony is a well-known, veteran storm chaser. His storm footage has been seen worldwide on a multitude of news outlets. You may also recognize him from Discovery Channel's "Storm Chasers" where he chased with Tim Samaras as part of Team TWISTEX for three seasons. He has also been featured in many other television programs, including several on the National Geographic Channel.

Tony has personally seen more than 300 tornadoes since beginning his journey in 1997, having seen nearly half of them across KAKEland dating back to the Attica and Conway Springs tornadoes in May of 2004. Another one of his most notable tornado intercepts was in Pilger, Nebraska in 2014 where he documented two EF-4 tornadoes on the ground at the same time.

Tony was raised in Circleville, Ohio, and went to college in Colorado where he earned a Bachelor of Science in Meteorology and Technical Communications, later earning a Master of Science in Professional Media and Media Management in Southern Illinois.

In his spare time, he is a homebody who enjoys raising his cats with his wife, Dania.  He is also an avid bowler who enjoys Martial arts, amateur radio, traveling, photography, is a Colorado Rockies baseball fan, and is a lifelong Washington Redskins fan known for wearing Hall of Fame Wide Receiver, Art Monk's #81 on his storm chasing ventures.