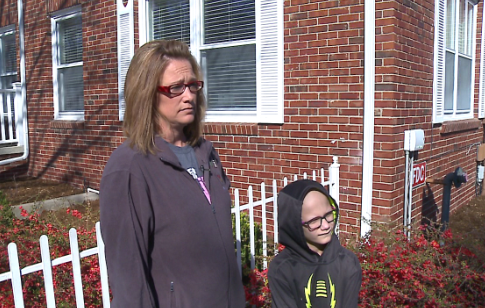 A KAKEland car dealer has stepped up to help an out-of-town family whose car was stolen.

Kristy Hinderliter and her son Layd'n were in Wichita, staying at the Ronald McDonald house, while Layd'n received radiation treatment for his stage four Neuroblastoma.

"I still can't believe it was even taken," said Kristy.

It's a story that had many people outraged.

"How horrible that must feel to be a mother and not know how to get your kid to treatment," said Jackie Crider, who saw the story on KAKE News Tuesday night.

Crider and her husband have five children of their own and knew they had to do something. The next day, her husband Josh went straight to his boss at Parks Motors.

Police found the vehicle, but everything inside was gone, including items that may not mean a lot to someone else but are everything to the Hinderliters.

"Back in 2010, we lost our 4 month old, and I had a CD of the songs we played at his funeral that I always kept in my car with me," said Kristy Hinderliter.

Josh and his boss at Parks Motors still wanted to help, so they called Kristy and set her up in a new vehicle.

"I was just like, 'Wow,' and that's when I told him, 'Are you serious? Is this for real?' Because people just don't... people don't do that anymore," said Kristy.

"We've been roughing it, it's been pretty tough," admits Steven Hinderliter. "With her having to stay with him and do the treatments, then I stay with the other two. Just can't say thank you enough."