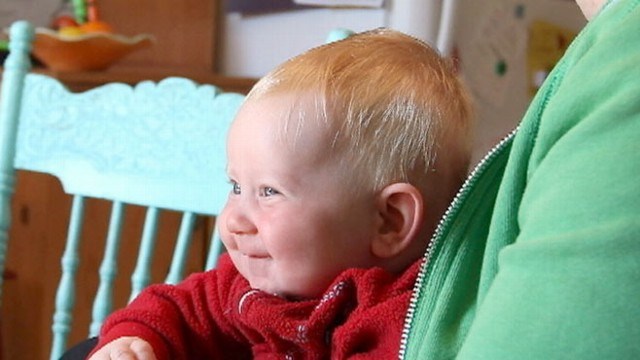 The mother of Storm Stocker, the Canadian baby being raised with only a few people knowing his or her sex, defended her family's choice to raise their child without regard to gender.

"The strong, lightning-fast, vitriolic response was a shock," said Kathy Witterick in a letter. "The idea that the whole world must know our baby's sex strikes me as unhealthy and voyeuristic."

Kathy Witterick, 38, and David Stocker, 39, have only allowed their midwives and two older sons to peek beneath the diaper of 4-month-old Storm.

When Storm came into the world in a birthing pool on New Year's Day, they sent out this email: "We decided not to share Storm's sex for now -- a tribute to freedom and choice in place of limitation, a standup to what the world could become in Storm's lifetime."

Even Storm's brothers, 2-year-old Kio and 5-year-old Jazz, have been sworn to secrecy, as well as one close family friend. The family, while not hiding the sex of their oldest sons, also allows them to explore their gender identity. Jazz wears his hair in pigtails.

Since the story of this family was first told in the Toronto Star., they've been barraged with critical responses.

Comments on the Internet read "one more messed up kid in the world" and "this is so wrong in so many ways."

The hosts of ABC's "The View" recently debated the parents' decision.

"First of all, the child is a baby. He doesn't know. He's not going to be able to say to anybody, ‘I'll let you decide.’ He's a baby. That's where you come in as parents," said Sherri Shepherd on "The View."

Even Storm's grandparents, although supportive, said they resented explaining the situation to friends and co-workers.

This isn't the first time a family has faced criticism for letting their child explore their gender identity. Cheryl Kilodavis experienced a big backlash earlier this year after she allowed her 5-year-old son to dress up as a princess for Halloween.

Two years ago, a Swedish couple made headlines when they announced they were raising their two-year-old child, Pop, as gender-neutral.

While child development experts applaud the family's efforts to raise their child free of the constraints of gender stereotypes, they say the parents have embarked on a psychological experiment that could be "potentially disastrous."

"To raise a child not as a boy or a girl is creating, in some sense, a freak," said Dr. Eugene Beresin, director of training in child and adolescent psychiatry at Massachusetts General Hospital. "It sets them up for not knowing who they are."

"To have a sense of self and personal identity is a critical part of normal healthy development," he said. "This blocks that and sets the child up for bullying, scapegoating and marginalization."

Most parents are eager to learn the sex of their child. Sixty-six percent of 18- to 34-year-olds said they would rather know the sex of the child before birth, according to a 2007 Gallup poll.

"We all have sexual identity," said Beresin. "The mission to have masculine and feminine traits more equalized and more flexible and not judgmental is awesome in a utopian community. But we take pride in our sexual identity."

The family gleaned the idea for this form of child-rearing from the 1978 children's book "X: A Fabulous Child's Story," by Lois Gould. The author uses symbolism and allegory to explore gender "creativity."

Stocker teaches at an alternative junior high school and said he plans his lessons around social justice issues. Witterick practices unschooling, which is similar to homeschooling, with no report cards, no textbooks and no tests.

But Beresin said the Canadian couple's approach is a "terrible idea."

"Identity formation is really critical for every human being and part of that is gender," he said. "There are many cultural and social forces at play."

Since the sexual revolution of the 1970s, child development experts have embraced a more flexible view of gender.

"The stereotypes of boys were that they were self-sufficient, nonempathetic, tough and good at war," said Beresin. "Girls were trained to be empathetic and caring and more nurturing."

But since then, women have become more competitive, aggressive and independent, according to Beresin. "By the same token, men are allowed to cry. We see hulking football players who are bawling."

"I think [the parents] are making a social gender statement," said Dr. Ari Brown, a pediatrician in Austin, Texas, and co-author of "Baby 411: Clear Answers and Smart Advice for your Baby's First Year."

Keeping the child's gender a surprise is "not a good parenting choice because it's their identity," she said. "Whether you later choose to reject your identity -- which sex you are -- or not. You are born with a set of parts and that's who you are."

Brown said she would worry about Storm as the child gets older.

"They do start to look at their parts and ask questions, and they tend to form a gender identity," she said. "Not all boys have to play with action heroes or girls with Barbies. You can certainly raise a child in a fairly gender-neutral home, and if you choose to do that, fine."

"Just because you have testes doesn't mean you have to only play with male-oriented toys," said Brown.

As for the younger siblings, Brown said she thought they might be able to keep mum about their baby's sex in the way that a family might encourage its children not to discuss a personal health matter.

"People keep their own family secrets," said Brown. "But when it comes to this, it just seems silly."

But Storm's family has held firm, at least for now. On a vacation in Cuba this winter with Witterick's parents, the family flipped a coin at the airport to assign the baby a gender temporarily, and for a week they called him a boy.

The social response changed instantly, and people said, "What a big, strong boy," according to an email Witterick sent to the Star. "In fact, in not telling the gender of my precious baby, I am saying to the world, 'Please can you just let Storm discover for him/herself what she (he) wants to be?!"

"Everyone keeps asking us, 'When will this end?'" said Witterick. "And we always turn the question back. Yeah, when will this end? When will we live in a world where people can make choices to be whoever they are?"