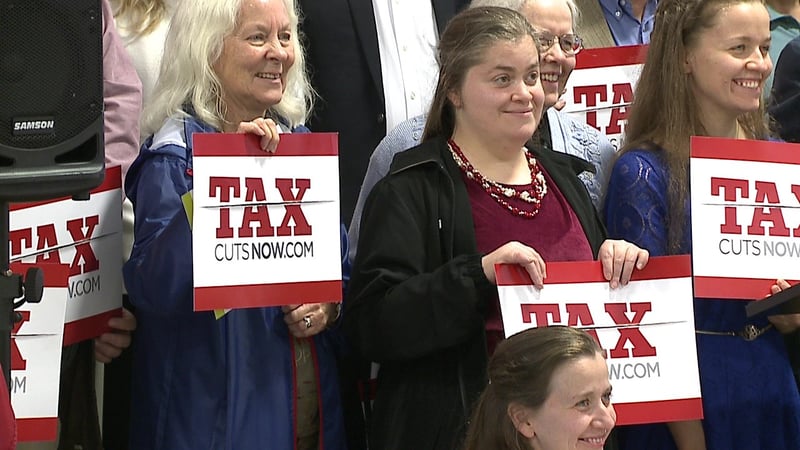 Senate Republicans may use the tax bill to repeal the affordable care act. The Senate finance committee is looking at ending the individual mandate in the tax bill. They say that would save hundreds of billions that could be used to help pay for the deep cuts. The goal is to give middle-class Americans a significant tax break, something that hasn't happen in more than 30 years.

"It's been 31 years since they reformed the tax code," said Jennifer Baysinger, Vice President of Kansas Chamber of Commerce at a recent tax reform rally.

Tax rallies are popping up across the country and lawmakers are motivated to act, but to do it they'll have to make cuts elsewhere.
One plan is to cut part of Obamacare by eliminating the individual mandate. That's a move that some say could save the nation billions of dollars. It's something long overdue according to Susan Estes, a tax reform advocate.

"We have the opportunity to fix this. and help the economic engine of our country."

But how could proposed tax reform Kansas family? The tax foundation estimates families could increase take-home pay by $2,500.
A different study from the Institute of Taxation and Economic Policy puts the immediate average tax cut at $1,800 but the cushiest tax cuts would be for the rich. Jim Ward, the Kansas House Minority Leader, says these estimates don't work.

"When you cut taxes if you believe that that is a stimulant to the economy. It is hard to calculate but you believe as a matter of faith that it will have an effect on the economy that you can't measure," said Ward.

Estes says it should be up to individuals how they spend their money.

"We need that money because frankly we can spend it better than government can and we can do more good for people. I see some heads shaking out there," said Estes.

Kansans that came to this tax rally want tax reform, but with the tax bill now taking on health insurance as well, they may have to wait longer.

The house is expected to vote on its version of the tax plan -- which won't include the individual mandate repeal -- as soon as Thursday.