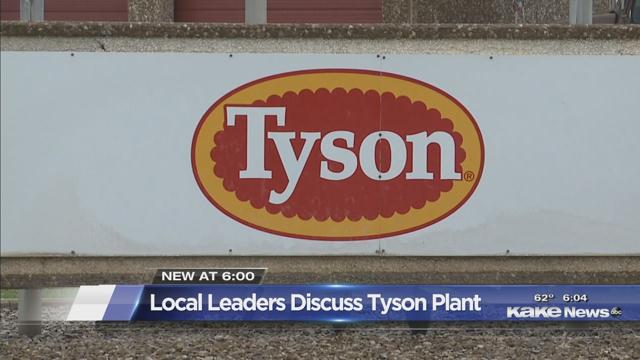 Keep an open mind on Tyson is the unified message from local elected officials and economic development leaders.

Tuesday afternoon local leaders met in the Workforce Alliance Center, along with several representatives from various state departments to hear from Tyson, by phone.

One of those in on the closed door meeting was second district Sedgwick County Commissioner Michael O'Donnell.  O'Donnell said,  "We learned more of what Tyson's looking for when it comes to a community where they would like to build this new processing plant in. And also what we have, in terms of land availability, what we have, in terms of economic incentives, and really just looking to see if Tyson would be a good fit for Sedgwick County."

O'Donnell said Tyson would need about 100 acres for its chicken processing plant.

The economic development group, Greater Wichita Partnership, is taking the lead on the due diligence and researching what it would take to get a Tyson Foods chicken processing plant here.

Often the public doesn't ever hear about these things until a company and local governments make a media release announcing a company is coming.

This deal is different because just as Tyson Foods thought it had an agreement with Tonganoxie and Leavenworth County to put the plant it there, those communities backed out.  So that opened the door to other Kansas communities and other states to compete for it.

It was only last week when Sedgwick, Cloud and Montgomery Counties learned they are finalists for the plant.  O'Donnell said, "We're really in the initial stages right now to see where we are going to compete with Cloud County and Montgomery County."

But O'Donnell acknowledged there are some concerns.  "We want to make sure that this plant is going to be state of the art, 21st century plant that's going to adhere to every environmental standard that the state of Kansas and the EPA have."   "We're asking constituents and people in our region to keep an open mind."

O'Donnell said Tyson could decide and make an announcement by January.