Police: Body is 'most likely' 3-year-old sent outside for not finishing milk 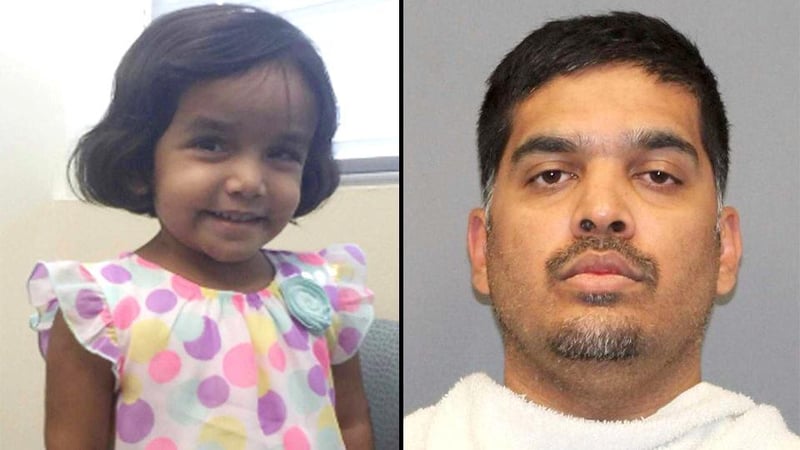 Investigators in Texas reported Sunday afternoon that remains of a small child found Sunday morning are believed to be that of missing 3-year-old Sherin Mathews.

In a news conference, a Richardson Police Department spokesperson said the remains were found about 11 a.m., nearly a mile west of the girl's Dallas-area suburban home. The spokesman said the remains are "most likely" that of the 3-year-old reported missing Oct. 7.

Authorities said that Mathews' parents have been notified.

An Amber alert went out for the girl after her father, Wesley Mathews, 37, made her stand outside her home in the middle of the night as punishment for not drinking her milk.

The father said he ordered Sherin to stand next to a tree behind the fence at their home at around 3 a.m. The tree is across an alley from the home.

Mathews went outside about 15 minutes later to check on her, but Sherin was gone, the affidavit states. The child, who has a developmental disability, was wearing leggings, a pink long-sleeved shirt and pink flip-flops.

The father didn’t notify police that his daughter was missing until about five hours later, said Sgt. Kevin Perlich. He said the delay in reporting the matter “is certainly concerning to us.”

“That does not seem like a normal response that one would do if you have a missing child,” Perlich said.

He was later charged with child endangerment.

No arrests have been made and officials are attempting to determine cause of death.

Perlich said Mathews and his wife adopted Sherin, who was malnourished when the couple took her in. Mathews told investigators it wasn’t unusual for the girl to wake up late at night to eat so that her weight would increase, Perlich said. That may explain why she was punished at 3 a.m., he said. He said authorities are casting a broad net in determining what happened to the girl.