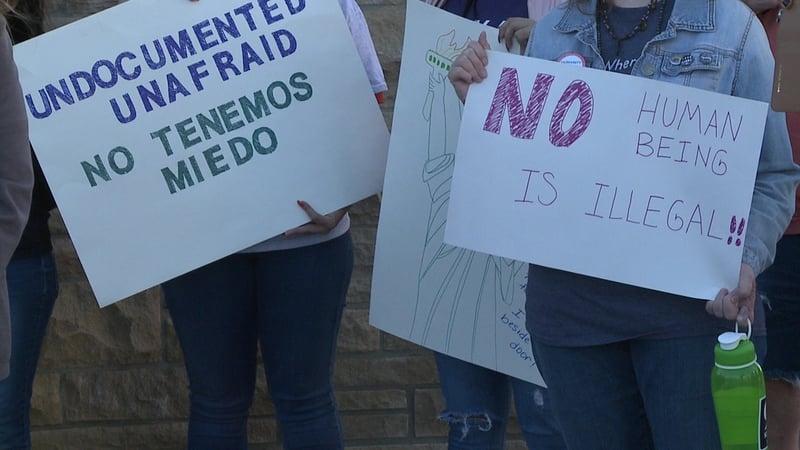 Area DACA recipients rallied today to draw attention to immigration laws. Kelvin Lopez went to the rally on Tuesday to stand against the repeal of the Deferred Action for Childhood Arrivals, better known as DACA.

"I came when I was three, I've been here for 18 years, so I don't really know much of my country. America is my country, I've just come to love it," said Lopez.

Lopez and his friend Tony Ibarra are just a few of the almost 7,000 DACA recipients in the state. Lopez prefers being called a DACA recipient for a simple reason.

"We are not much of dreamers anymore, we are more 'doers'," said Lopez.

Ibarra spoke at the rally. He says that there are issues with the immigration system that need to be fixed.

"What most Americans don't know is that process can take anywhere from 15 to 20 years," said Ibarra.

Ibarra wants to speak with Congressman Ron Estes, but at a scheduled meeting today only congressional staff were present.

"That representative needs to hear our stories, he needs to be informed about what dreamers have overcome," said Ibarrra.

Congressional candidate James Thompson who is running against Estes says it is up to Congress to change the laws.

"It delayed prosecution on immigration cases to allow people to go through the process of getting their citizenship, by refusing to continue that program Trump has put it back into Congress's hands, to either pass a Dreamer Act or to start deporting people," said Thompson.

Lopez wants the laws to change so he can hopefully one day become a citizen in the only country he knows.

"I know everything about America, like, if I were to take the citizenship test right now I would pass it with flying colors," said Lopez.

The rally was held today specifically since Kansas lawmakers are in the area to do work in their districts.